EUAs reversed in the afternoon after climbing to a fresh record

The power spot prices eroded 9.17€/MWh to reach 55.15€/MWh on average in Germany, France, Belgium and the Netherlands, pressured by forecasts of stronger renewable production.

The below-average temperatures continued to strengthened the French power consumption which rose by 2.16GW from Wednesday to reach 64.43GW on average. The country’s nuclear generation improved as well by 0.56GW to 45.11GW on average. The German wind output fell further to 3.08GW (-3.44GW dod) but should climb back above 11GW today and surge to reach 26GW on Sunday.

EUAs sharply rose on Thursday morning, lifted by stronger European equities and gas prices and bullish signals from the auction which cleared with a massive 0.22€/t premium to the secondary market and above-average 1.92 cover ratio.  The carbon prices hit a fresh record of 43.77€/t but quickly reversed afterward and eroded 1.37€/t over the afternoon, pressured by the falling oil and US stock prices, to eventually settle at 42.40€/t, -0.59€/t day-on-day.

The early rise of gas and emissions prices supported the power curve prices in the morning and despite a similar correction in the afternoon, they settled the day with overall healthy gains along the curve. 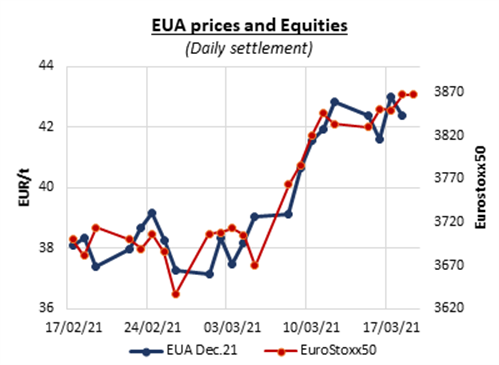 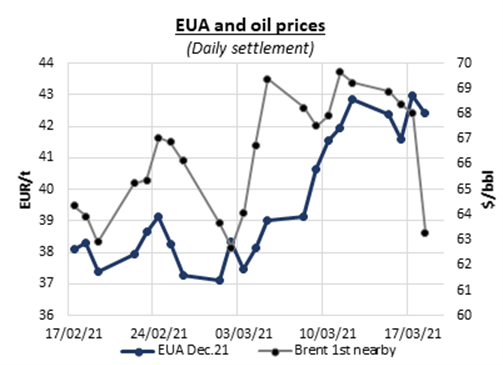 Crude prices remained firm yesterday, at 75.4 $/b for ICE Brent font-month contract, as gasoil cracks continued to sharply increase in Europe and Asia. The…

Brent prompt future contract came back to 63.5 $/b on early Tuesday, as Texas’ cold snap affected the US petroleum markets in unpredictable ways. WTI-Brent…
Join EnergyScan