The European power spot prices faded yesterday on forecasts of stronger wind output and warmer temperatures dampening the power demand. Prices eroded 7.74€/MWh to 50.70€/MWh on average in Germany, France, Belgium and the Netherlands., pushing the German prices below the clean gas and coal costs.

Colder temperatures strengthened the French power consumption yesterday which rose by 0.86GW to 73.13GW. On the other hand the nuclear production waned by 0.89GW to 50.20GW. The German wind generation soared by 14.69GW to 21.57GW on average and should reach nearly 40GW by Thursday.

EUAs traded rangebound on Monday, rebounding above 32€/t in the morning following Friday’s sell-off, before giving back all the gains in the afternoon to eventually settle nearly flat at 31.62€/t, -0.12€/t from the previous session. Overall waiting for the auctions restart scheduled on Jan.29th, the market was torn between dip buying, bullish signals from the financial markets and buying interest in anticipation of the tighter 2021 supply, and the bearish signals from milder weather prospects, heavy auction supply coming in February after a six-week drought and concerns regarding the worsening covid situation.

The power prices extended losses along the curve on Monday, pressured by the weaker underlying gas prices, late retreat of emissions and the warmer temperatures prospects heavily weighing on the near-curve contracts. 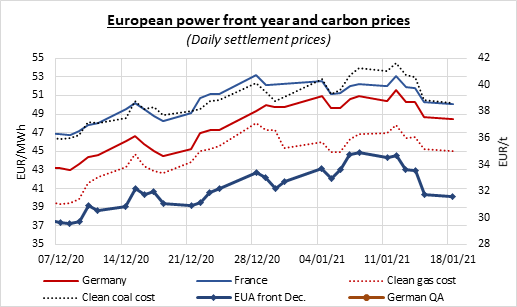 Recovery hopes and vaccination progress to the rescue

Confidence seems returning a bit on financial markets thanks to good economic indicators and hopes of acceleration in the vaccination campaigns. Bond yields edged up…

The market is waiting for the Fed

Financial markets should remain rather cautious today ahead of the end of the Fed meeting. We do not expect any policy change, but the tone…

US refiners ramp-up operations, at the expense of product stocks