Mr. Biden’s inauguration as president marks a return to normalcy

On his first day as president, Mr. Biden signed a series of executive orders unwinding the most controversial aspects of the previous administration’s policy. Financial markets’ optimism was nevertheless rather fueled by recovery hopes linked to the big stimulus package Mr. Biden expects to be approved by the Congress as soon as possible. The EUR/USD is on the rise again this morning, around 1.2130, but after an unexpected downward correction yesterday. The GBP reached its highest level in 8 months vs the euro (0.8838) on stronger-than-expected inflation figures, but also likely because the country’s vaccination campaign looks far ahead the other major countries, which may allow an exit from lockdown quicker than elsewhere, as soon as March. ECB meeting today.

Overnight, the release of Japanese trade data showed exports on the rise on a yoy basis for the first time since November 2018, but imports remained down 11.6%, as domestic demand remains weak. 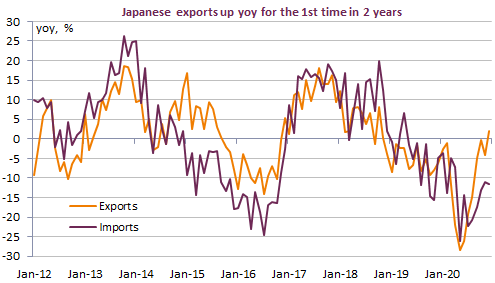 European gas prices were generally up again yesterday, supported by falling temperatures and lower Norwegian supply. Indeed, due to an unplanned outage at the Oseberg…

TTF ICE month-ahead prices traded as high as €30.24/MWh on Monday, breaching the €30/MWh mark for the first time since 2008. At the spot level, prices…

The markets, which had welcomed the Fed’s 75bp rate hike, finally revised their judgement significantly afterwards. Concerns about growth took over, leading to a sharp drop in…
Join EnergyScan