No agreement in Europe on stopping Russian oil imports immediately

This explains the fall in crude oil prices. Brent 1st-nearby, which had approached $124/b yesterday morning, is now trading below $117/b. Volatility promises to remain very high in any case, as there are so many parameters that can make prices vary on both the supply and demand sides. Kazakhstan also announced that one of the 3 docking points in the Black Sea to load oil from the CPC pipeline would reopen today. The other 2 should follow within 3 weeks. Remember that the transit is about 1.5mb/d in normal times.

The tension on diesel in Europe is not diminishing: the price differential between ICE gasoil and Brent has almost tripled to over $30/b since the beginning of the war. As with crude oil, Russian gasoil is offered at a very high discount but is not finding takers.

Prices up as Russian supply disappointed

European gas prices increased yesterday as the hopes of an increase in Russian flows have been dashed. Indeed, Gazprom did not book extra transportation capacity… 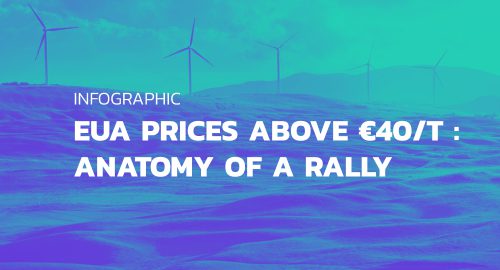 Infographic – EUA prices above €40/t : anatomy of a rally

[UPDATE : 18/03/2021] EUAs are the best performing energy commodity in Europe since the start-up of the COVID19 outbreak. They even reached an absolute record high…