Risk aversion returned on financial markets yesterday, as a key measure of inflation expectations topped 2.5% in the US, which drove bond yields higher. Yet, US economic reports were mixed, but prospects of the vote of the stimulus package by the Senate in the coming days fuel intense debates about its potential risks. In Europe, the UK Chancellor the Exchequer unveiled a budget trying to balance the need for further stimulus in the short term and the need to reduce deficits in the long term. The German government also unveiled mixed measures both extending the lockdown for some activities, while easing restrictions for others. The French government should refrain from imposing a new confinement on Paris and its region in the face of growing hostility from the population. The EUR/USD exchange rate is marginally down, around 1.2060. 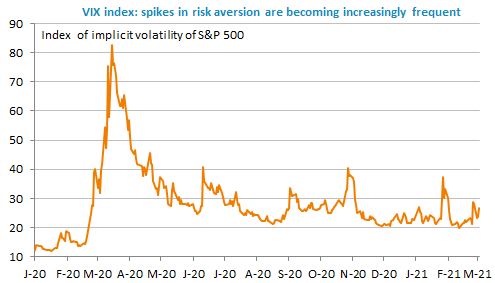 US Fed ready to take “stronger” actions to bring inflation down

The widely awaited intervention of Lael Brainard, member of the Fed’s Board of Governors, gave clear indications on the acceleration of the monetary tightening expected…

Equities and bonds are up at the same time, which likely reflects the fact that market participants remain optimistic about the economic recovery and the…

The European power spot prices spiked to record levels near 300€/MWh yesterday, driven up by the morning hefty surge of fuels prices and forecasts of…
Join EnergyScan