The power spot prices remained quite stable in north western Europe yesterday amid forecasts of steady demand, nuclear availability and renewable production. Prices reached 76.30€/MWh on average, +0.14€/MWh day-on-day and ranging from 72.80€/MWh in the Netherlands to 81.14€/MWh in France.

EUAs climbed to a new record high of 44.95€/t yesterday morning in another attempt to break above the psychological 45€/t level, but started to fade after a rather weak auction and dropped at the end of the sessions amid strong pressure from a late fall of equities.

The bullish gas markets and early upward move of emissions buoyed the power prices on Monday which posted moderate gains along the curve. 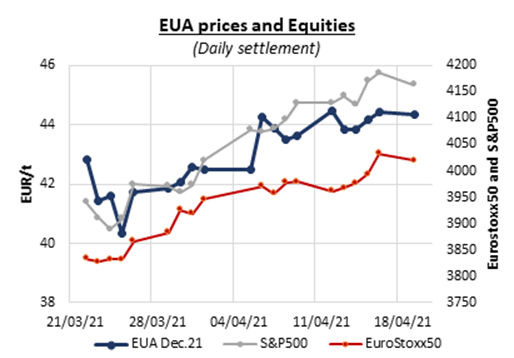 European gas prices were mixed on Friday: rather down on the markets benefiting from strong LNG supply like the UK NBP, rather up on the…

Less growth in the US, more inflation in Europe and still the Covid in China

Profit taking drove EUAs back in middle of the trading range