The French power consumption rose by 3.50GW to 76.33GW on average on Tuesday, strengthened by the below-average temperatures. The nuclear generation remained steady at 49.41GW, -0.02GW dod. The German wind production jumped by 8.34GW to 14.35GW on average and should remain around that level today but slightly ease tomorrow.

EUAs traded rangebound yesterday, slightly rebounding at the beginning and the end of the session on technicals and stronger equities, but easing in the afternoon on the back of weaker gas prices. Most market participants are waiting for the first auction of the year scheduled on Friday, with several expecting a strong demand during the first sales while others questioned the compliance buying interest without a cold spell in February. The EUA Dec.21 contract eventually closed at 33.35€/t with a mere 0.19€/t daily gain.

The power prices posted hefty losses yesterday, driven by the sliding gas markets and bearish weather prospects with the largest losses observed in the short-term contracts. 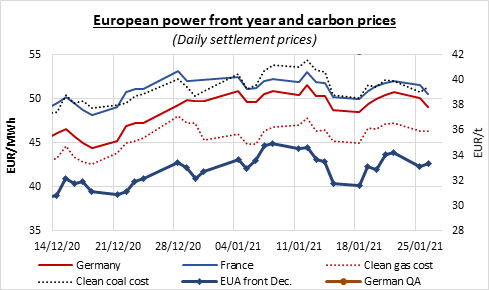 Prices up as Gazprom did not book additional transport capacity

European and Asian gas prices retraced some of their strong gains recorded earlier in the week on Friday. Spot prices also weakened slightly on the…