The European power spot prices were mixed yesterday, up in Belgium and the Netherlands, but down in Germany and France on forecasts of stronger renewable production and lower power demand.

The below-average temperatures continued to support the French power consumption which rose by 1.09GW from Friday to 80.12GW on average. The warming weather expected today and tomorrow should however pressure the power in the next couple of days. The nuclear production remained steady at 51.71GW (+0.03GW from Friday). The German wind generation spurred to 27.37GW on average (+17.31GW dod) and should climb above 35GW by tomorrow, before falling back below 15GW on Thursday.

After climbing to Friday’s high of 35.20€/t at the opening of Monday’s sessions, EUAs proceeded to fade throughout the day, weighed by bearish signals from the oil and financial markets with possible additional pressure from the forecasts of stronger wind output and rising temperatures for next week. With nearly three weeks remaining before the start of the EU ETS 4th phase auctions, some upside potential remains for carbon prices in the upcoming sessions. However, the worsening covid situation could start impacting the emissions market, so far spared by the second wave of virus, if governments decide to implement stricter lockdowns. Moreover, considering the significant number of allowances scheduled to be sold in February (60.4m EUAs, +7.6m from February 2020), some market participants warned that traders that took advantage of the recent carbon prices sharp rally could start unwinding their long positions.

The power curve prices were also mixed over the first session of the week. The short-term contracts tracked the soaring gas prices with support from the bullish weather forecasts for the end of the month while further on the curve the power prices were driven down by the waning EUAs. 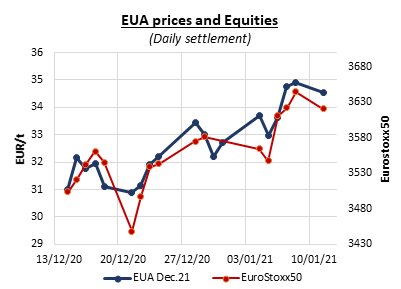 European gas prices were generally up again yesterday, supported by falling temperatures and lower Norwegian supply. Indeed, due to an unplanned outage at the Oseberg…

European gas prices were up overall yesterday, still supported by uncertainties on Russian supply and LNG flows (following the shutdown of the US Freeport LNG…

European gas prices were generally up again last Thursday, supported by falling temperatures and lower Norwegian supply. Indeed, due to an unplanned outage at the…
Join EnergyScan