The power spot prices surged by 14.48€/MWh on average in Germany, France and the Netherlands, lifted by a combination of weak renewable production and a demand strengthened by below-normal temperatures. On the other hand, prices in Belgium dropped by 14.22€/MWh from the day prior.

The French power consumption edged up to 78.19GW on average yesterday, +0.27GW day-on-day, similarly to the country’s nuclear generation which gained 0.35GW on day to reach 51.51GW on average.

The German wind production eased by 5.42GW to 11.37GW on average, and should drop further to around 7GW today.

EUAs climbed by 0.62€/t at the opening of Wednesday’s session, likely pushed by the early steep rise of equities. Emissions however proceeded to give back all the gains afterward and would have settle the day flat if a late surge of the U.S. financial markets betting on a Democrats’ victory over the control of the U.S. senate had not buoyed back the carbon market over the last hour of trading. The EUA Dec.21 contract eventually closed the day at 33.63€/t, +0.67€/t from Tuesday. 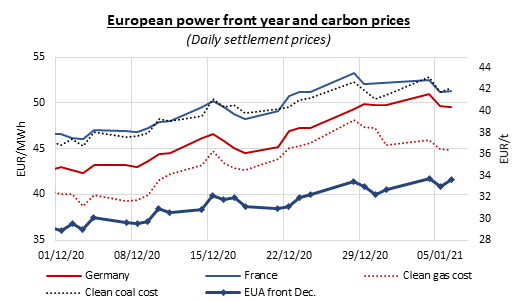 The combination of a further drop in Russian gas imports at Velke Kapusany (-10 mm cm/day), prospects of a drop in temperatures by the end…

The pressure keeps building in the crude market, with ICE Brent crude rallying close to 88 $/b at the prompt this morning in a backdrop of…
Join EnergyScan