Late but strong rebound of EUAs amid surging US equities

The Power spot prices rose further up in northwestern Europe yesterday, pushed by the forecasts of weaker wind production and colder temperatures. The prices in Germany, France, Belgium and the Netherlands finally climbed above the clean coal costs to reach 64.33€/MWh on average, +7.63€/MWh day-on-day.

Despite the colder weather, the French power consumption slightly eased by 0.19GW to 62.26GW on average on Wednesday. The country’s nuclear generation faded as well to 44.55GW, -0.12GW dod. The German wind production dropped by 10.46GW from Tuesday to 6.63GW on average, and should reach its lowest point of the week today below 3GW, before rebounding in the upcoming days.

After a rather rangebound morning and a slight correction following the auction which cleared with a significant 0.20€/t discount to the secondary market and weak 1.70 cover ratio, the EUA prices strongly rebounded in the afternoon, first supported by dip buyers attracted by the below 42€/t prices and later in the session by a late surge of US equities and gas prices. The EUA Dec.21 contract eventually settled at 42.99€/t, +1.39€/t from the previous session.

The Commitment of Traders report published yesterday confirmed that last week’s surge of carbon prices was once again induced by the speculators. The Investment Funds have indeed increased their net longue position by 12mt (+22%) from the previous week while the number of persons in this category holding a position further rose by 11 to reach 251. On the other hand, the operators with compliance obligations have reduced their non-hedging longue position by 7mt and increased their short by 2mt. With a similar variation on their hedging positions, their total net position hence dropped by 15mt (-3.4%) from the previous week.

Lifted by the bullish gas and emissions prices, the power prices posted moderate gains along the curve on Wednesday. 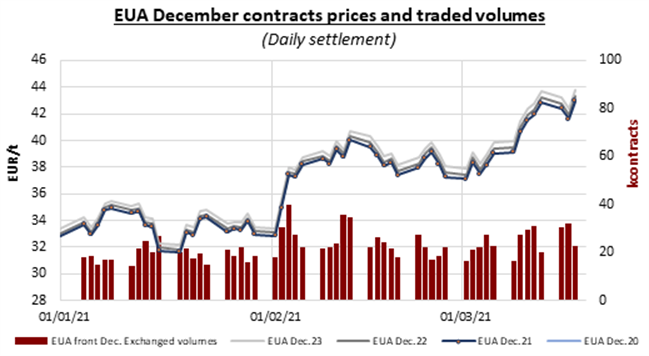 Growing risk premium at the TTF beyond WIN22

European gas curve prices showed significant gains on maturities beyond WIN22 on Friday, still supported by political statements from the US over a blocking of…