The warming temperatures and soaring wind output continued to pressure the European power spot prices yesterday which fell to 48.84€/MWh on average in Germany, France, Belgium and the Netherlands, -5.90€/MWh dod.

The temperatures rose to nearly 6°C above normal in France yesterday, hence dampening the country’s power consumption by 7.12GW to 65.78GW. The nuclear generation was curbed by the strike action from the energy workers protesting the Hercules government project to restructure EDF and fell by 1.64GW to 48.30GW. The German wind production eased by 2.20GW on Thursday but is forecast to surge to around 23GW today.

After a slightly bearish opening, EUAs rose throughout Thursday’s session, lifted by forecasts of dropping temperatures for February and subsequent expectations of higher power demand and thermal generation, surging oil and financial markets and hefty gains in gas prices. The market activity was however rather thin as most market participants were waiting for the result of the first auction of the year later today before taking any direction. As the EUAs sold or allocated during the fourth phase of the EU ETS (2021 – 2030) cannot be surrendered for compliance obligations over the GHG emitted in 2020 (i.e. in April for last year’s emissions) the ICE will launch daily Phase 4 EU allowances futures today, trading alongside its already existing Phase 3 contracts until the end of April.

The stronger fuels and emissions pushed the power forward prices up with the heaviest gains seen in the February contracts due to the cooler weather prospects for the upcoming weeks. 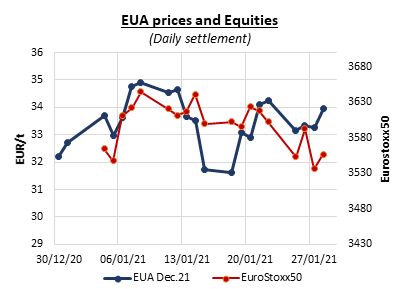 Yesterday’s meeting for OPEC+ members was adjourned, despite a partial agreement reached between the two heavyweights of the group, Saudi Arabia and Russia. The agreement…