EUAs reversed on surging equities after a mostly bearish session

The French power consumption rose by 2.58GW from Friday to 63.26GW on average. The nuclear generation continued to improve at 43.62GW, +1.40GW from Friday.  The German wind production dropped to 3.41GW on average (-11.85GW dod) and after slightly strengthening to day should start surging tomorrow and reach 40GW by Thursday.

The carbon prices opened up on Monday, likely lifted by the bullish momentum of Friday’s late rebound, but faded throughout the day amid pressure from the weaker energy complex. The EUA prices however sharply rebounded at the end of the session after hitting the middle Bollinger band (which became a technical support after prices broke above on the previous session) and rose back above 39€/t, driven by a late surge of equities. The EUA Dec.21 contract eventually closed at 39.13€/t with 0.11€/t gains from Friday’s settlement. 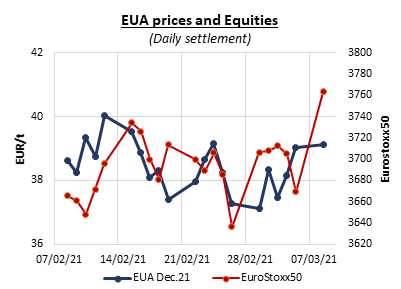 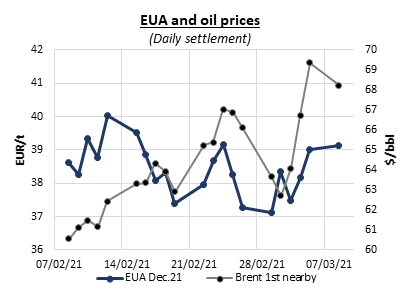 Crude prices remained supported throughout yesterday, despite builds reported by the API survey in the US. Indeed, crude stocks grew by 2.3 mb, while refined…

The European power spot prices were mixed yesterday, sharply rising in France, Belgium and the Netherlands due to the surging gas prices, but edging down…

If the European power spot prices for Monday plunged amid a demand weakened by the Easter holiday and the surging wind output, they sharply rebounded…
Join EnergyScan