The European power spot prices climbed back above the clean gas costs yesterday, lifted by the forecasts of weaker wind output and lower temperatures. Prices hence reached 56.13€/MWh on average in Germany, France, Belgium and the Netherlands, +1.97€/MWh from Friday.

The colder weather strengthened the French power consumption on Monday which rose by 1.97GW from Friday to reach 61.55GW on average. The country’s nuclear generation was also up by 1.09GW at 44.39GW. On the other hand, the German wind production dropped by 3.84GW from Sunday to average27.03GW on average and should fall further below 10GW by tomorrow.

EUAs traded sideways over the first session of the week, rising and hitting a fresh record high at 43.36€/t in the morning, taking support from the oil and financial markets which opened the session up from Friday’s settlement, before reversing and eroding nearly 1€/t over the afternoon amid pressure from the fading equities, oil and energy complex. The auction held in the morning sent mixed signals by clearing with a 2-cent/t premium to the secondary market but weak 1.66 bid coverage. Despite the carbon prices hovering in overbought territory for a week now, several market participants pointed to the strong bullish momentum of emissions and see yesterday’s late correction only as the market taking a break before posting further gains, with the speculators possibly aiming to push prices towards 45€/t, with potential additional support from the late compliance players as the April deadline gets near. Considering the unsupportive short term fundamentals, the EUAs could however face some difficulties climbing further up without new positive signals from the macro environment.

The power curve prices tracked the gas and emissions markets evolution, rising in the morning but retreating in the afternoon, to settle mixed at the end of the session. 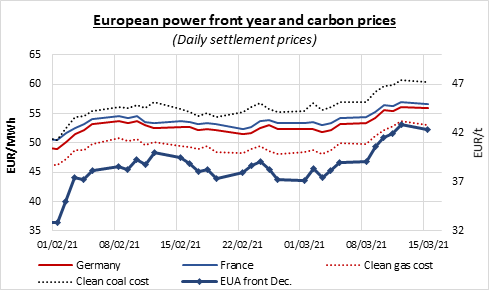 Prices down on bearish fundamentals

Is the best is the enemy of the good?

Brent prompt future price consolidated at 61 $/b, amid an increasingly bullish US crude market, pushing US grades higher compared to North Sea values. However,…
Join EnergyScan