The European power spot prices for today are slightly up compared to Friday and back above the clean gas and coal costs, supported by forecasts of stronger power demand and weaker French nuclear availability. Prices reached 60.54€/MWh on average in Germany, France, Belgium and the Netherlands, +5.37 from last week’s last working day.

The French power consumption eased by 0.13GW to 64.29GW on average on Friday, and despite a rebound today should weaken quite significantly throughout this week as a consequence of the temperatures rising progressively above the seasonal normal. The country’s nuclear availability was mostly stable at 45.08GW on average, -0.03GW dod but should be slightly lower in the upcoming days. The German wind production rose by 7.99GW from Thursday to 11.07GW on average and peaked to 27.15GW on Sunday but should quickly ease back and presents a level similar to Friday today.

The EUA prices eroded 0.43€/t over Friday, likely driven down by profit taking with additional pressure from the weak equities, oil and energy complex. The Dec.21 contract opened 0.52€/t lower than Thursday’s settlement, and despite a slight rebound in the morning started plunging after the auction of the day cleared with 0.17€/t discount to the secondary market and a weak 1.44 bid coverage. The bellwether contract dropped as low as 41.20€/t but a late reversal (likely induced by a sudden rise in oil prices) managed to push carbon prices back in their long-term upward trend range at the end of the session to eventually settle at 41.97€/t with nonetheless a 0.88€/t loss from the previous week. 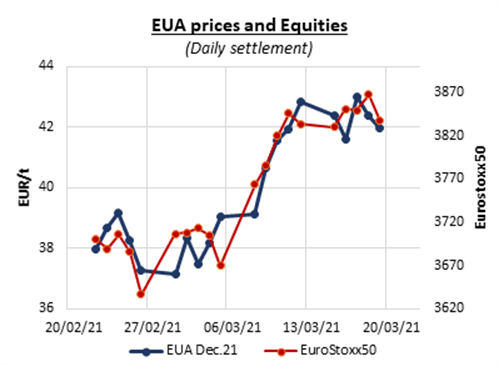 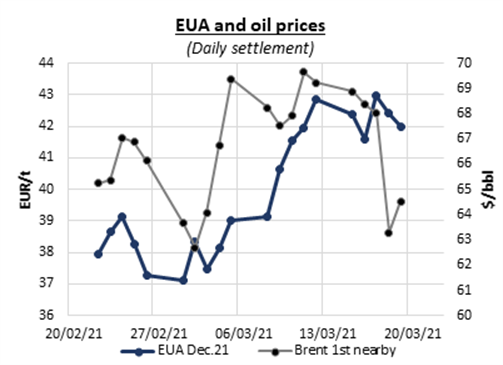 Unsurprising decision by the ECB

The ECB has done pretty much what was expected of it, judging by the small drop in bond yields and the stability of the euro that followed…

ICE Brent prompt contract continued to climb, at 74.2 $/b, as the API survey reported significant draws in US crude commercial stocks, while products inventories…
Join EnergyScan