The French power consumption continued to ease with the warming temperatures and faded to 67.99GW on average on Tuesday, -4.72GW day-on-day. The country’s nuclear generation slightly improved by 0.22GW to 44.63GW. The German wind production waned by 7.91GW to 16.23GW but should climb back to around 25GW today before progressively easing over the following days.

The carbon market started Tuesday on a bullish tone which pushed the Dec.21 contract back above 40€/t up to 40.53€/t. Likely weighed by the failure to extend Monday’s record which might have induced some profit taking, the EUA prices decreased afterward and throughout the remaining of the day with possible additional pressure from the slightly weaker equities and gas prices, and eventually settled at 38.86€/t, -0.66€/t day-on-day. The morning’s auction cleared with a 0.11€/t discount to the secondary market but a decent 1.82 cover ratio.

Despite a late rebound of gas prices, the power curve were mostly down yesterday driven by the fading EUAs and early weakness of the gas market. 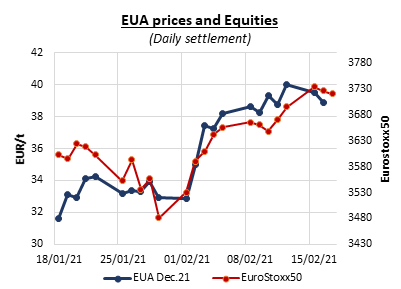 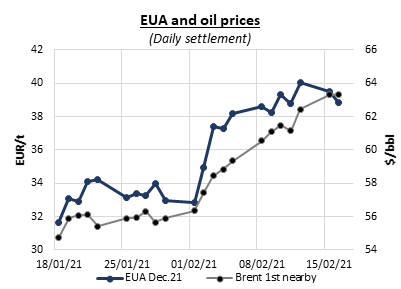 The European power spot prices pursued their ascend yesterday, driven further up by the soaring gas prices despite forecasts of slightly weaker power demand. The…

The power spot prices were mixed in northwestern Europe yesterday, up in Germany and the Netherlands on forecasts of dropping wind and solar output, but…

Prices dropped again, in Europe and in Asia