EUAs rebounded on technicals and bullish oil and equities

The power spot prices slightly fade in northwestern Europe yesterday on the back of forecasts of higher wind output, nuclear availability and temperatures. Prices reached 51.77€/MWh on average in Germany, France, Belgium and the Netherlands, -1.54€/MWh day-on-day.

The French power consumption edged up by 0.11GW to reach 59.52GW on average on Tuesday. The nuclear production increased as well to 40.04GW, +0.83GW from Monday, and is expected to further improve and reach up to 42.60GW by Friday. The German wind remained rather stable at 3.97GW on average (+0.11GW dod) but should start rising from today and reach 10GW by tomorrow.

EUAs opened down from Monday’s settlement yesterday but quickly rebounded on the lower Bollinger band and rose throughout the day. The mostly technical upward move following the past three straight bearish sessions (although possibly supported also by the bullish financial markets and the mid-day rebound of oil prices) eroded the losses posted from Friday and was only temporarily curbed by the weak morning auction which cleared with a 0.13€/t discount to the secondary market and below average 1.56 cover ratio. A late surge pushed the carbon prices up by nearly 0.80€/t but the middle Bollinger band capped the gains and the EUA Dec.21 contract eventually closed at 38.35€/t with a nonetheless hefty 1.22€/t daily gain.

In other news, according to the regulator BNetzA Germany will tender a further 2.481 GW of coal closure compensation in April to achieve the 15 GW remaining capacity target by end-2022. 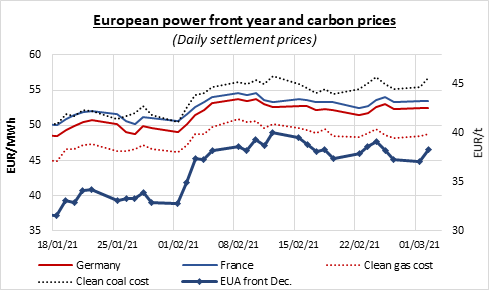 European gas prices were mixed yesterday, lacking support to climb much higher in a context of stable Russian flows and rebounding Norwegian flows (at 320…
Join EnergyScan