The European power spot prices started falling yesterday amid forecasts of surging wind output, rising temperatures and stronger hydro production. Prices hence eroded 10.31€/MWh from the day prior in Germany, France, Belgium and the Netherlands to reach 50.60€/MWh on average.

Despite higher temperatures, the French power consumption slightly strengthened by 1.10GW on Tuesday to average 64.36GW. The nuclear production remained steady at 43.43GW, -0.20GW day-on-day. The German wind production slightly rose yesterday to reach 3.97GW on average (+0.56GW dod) but should start surging from today and climb above 41GW by tomorrow.

Supported by the bullish stocks and energy complex and a strong auction result, the bulls pushed the EUA prices above 40€/t yesterday amid debate on the Cross Border Adjustment Mechanism (CBAM) in the EU and the US announcing their willingness to implement strong climate action. The psychological 40€/t level resisted for a time to the bulls’ attempt to test the record 40.63€/t, but the EUAs finally broke above and climbed to a fresh all time high of 40.83€/t at the end of the session. The Dec.21 contracts jumped by nearly 0.50€/t after the morning’s auction cleared 0.09€/t above the secondary market (the first premium seen in ten days) and strong 1.98 bid coverage, suggesting a strong demand despite the high wind production and mild temperatures expected this week.

On the policy side, the European Parliament voted yesterday against the gradual phaseout of the free allocation of allowances in regard of the implementation of the CBAM. This amendment’s vote was tight with 344 votes in favor and 329 against, reflecting the discrepancies in opinion over the issue as the elimination of the free allocation could incentive the operators to further reduce their emissions, but also threaten economically the European industry. This vote is however non-binding and only aims at providing the Parliament’s view before the Commission’s legislative proposals expected in June.

The power curve prices posted hefty gains along the curve on Tuesday, lifted by the surging gas and emissions prices. 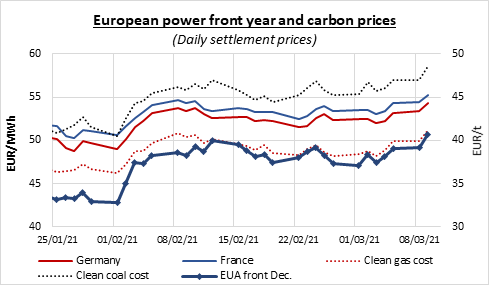 US retail sales posted a strong rebound in January while industrial activity remained solid. This can only reinforce doubts about the relevance of a recovery…

Collapse at the prompt

The possibility of a coordinated SPR release is seriously denting the sentiment and upside risk in crude oil futures markets. Japan is now considering seriously an…
Join EnergyScan