The French power consumption eased by 0.86GW on Wednesday, similarly to the country’s nuclear generation which faded by 0.44GW to 47.85GW. As expected, the German wind production surged to 23.84GW on average, +13.93GWdod, but should drop back to around 16GW today.

EUAs hit their (then) all-time high of 35.42€/t at the market open yesterday, and slightly retreated afterward. The morning’s auction clearing with a record 1.40€/t premium to the secondary market at 38.00€/t and an impressive 1.91 bid coverage however pushed The EUA Dec.21 contract up by 6.2% in the following hour, a massive and quick spike once again mostly attributed to speculators as fundamentals of the market remain unsupportive with heavy volumes of allowances scheduled to be auctioned in February, negative clean dark and spark spreads for the front months contracts and first signs of covid 2nd wave impact on the industry sector. Emissions prices climbed up to 37.85€/t later in the day but for once did not manage to match the auction price. This surge brought carbon prices far in overbought territory and most market participants are now expecting a correction in the upcoming sessions, although a large uncertainty remains regarding the direction EUAs could take before this pull back. 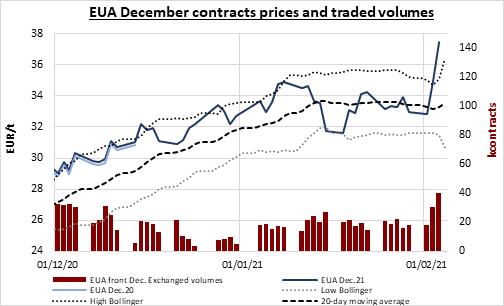 Expectations of weaker demand and slightly improved nuclear availability continue to weigh on the European power spot prices yesterday which eroded 2.60€/MWh to 47.13€/MWh on…

The power spot prices were mostly stable in northwestern Europe yesterday, remaining just below the clean gas costs as the contracts were torn between forecasts…
Join EnergyScan