The French power consumption eased further by 1.40GW to 62.07GW on average as temperatures continued to rise. The latter are however expected to drop significantly over the upcoming days and fell below normal by next Monday. The nuclear generation slightly decreased to 48.29GW (-0.40GW dod), similarly to the German wind production which faded by 0.62GW to 9.91GW, although the latter is forecasted to soar above 23GW today.

EUA posted a massive 6.5% daily gain yesterday as prices started to spike after the morning’s auction cleared with a 0.13€/t premium to the secondary market, with additional support from a downward revision of temperatures forecasts for next week and bullish signals from the oil and financial markets. The sharp upward move seems to have also been induced by speculative buying due to a Bloomberg article published before market open stating that some hedge funds see carbon prices surged above 50€/t this year (as high as 100€/t according to Andurand Capital, “one of the best-performing hedge funds in 2020”). If the bullish outlook of emissions prices is shared by most market participants, mainly due the tighter supply expected over the Phase 4 of the EU ETS (2021 – 2030) and the system’s revision expected in June, most analysts have a way less aggressive view on the upside potential, seeing prices more likely to average between 33 and 40€/t in 2021. Moreover, in case a of massive and fast prices rally such as the one expected by the hedge funds, the EU policy makers have the possibility to intervene (i.e. adding supply to the market) in order to preserve the European industry competitivity.

The power prices posted hefty gains along the curve, lifted by the surging EUAs and slightly stronger gas prices. 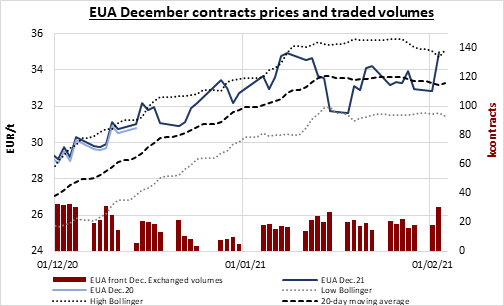 The US 10-year yield eased slightly below 1.6% despite surveys showing increasing inflationary pressures. We mentioned the Bank of France survey yesterday, the main findings of which…

Brent prompt futures continued to rally to 54.7 $/b on early Thursday as Saudi Arabia guaranteed that their voluntary supply cut would last two months…
Join EnergyScan