The European power spot prices significantly rose yesterday, lifted by forecasts of falling wind output and below-average temperatures. Prices jumped to 64.32€/MWh (+18.25€/MWh) in Germany, France, Belgium and the Netherlands, while the surging gas prices pushed the clean gas costs back above the clean coal costs.

The dropping temperatures strengthened the French power consumption by 10.02GW from Friday to 71.03GW on average. The country’s nuclear generation waned by 2.29GW to 47.02GW on average but is expected to climb back above 48GW today. The German wind production eroded 10.90GW from Sunday to 22.03GW on average, and should drop further to around 11GW today.

EUAs spiked to 39.80€/t within a few minutes of the market open on Monday, buoyed by the higher fuels prices and the well-below normal temperatures across Northwest Europe. Emissions prices however proceeded to slightly retreat afterwards, possibly driven by the weak morning’s auction which cleared with a 0.19€/t discount to the secondary market, and eventually settled at 38.61€/t, +0.41€/t from Friday. Despite several technical factors pointing to an imminent correction, EUA have been resilient so far, possibly supported by the stronger oil prices, the cold weather prospects for this week and the Phase 4 free allocation likely delayed after the April deadline (according to Montel) which could make some market participants unwilling to sell allowances. EUA prices could still aim at testing the 40€/t resistance, but the milder temperatures expected from next week will remove one of the support and we could see some speculators starting to take profit from the recent sharp rally of emissions, although the approaching compliance deadline might limit the downside potential.

On the curve, the power prices posted hefty gains over the first session of the week, supported by the stronger emissions and underlying gas prices as the higher demand due to the cold spell lifted the prompt prices which pushed the prices further on the curve up. 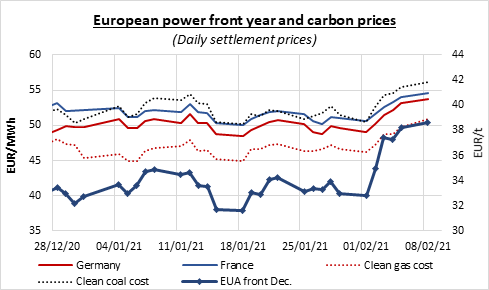 Crude oil prices scaled back to 66.9 $/b, amid the resolution of the US colonial pipeline issue on Thursday and selling pressure coming from CTA…

Chinese runs surprise to the upside

ICE Brent prompt contract was trading at 69.7 $/b on Monday as most Texan refineries were restarted over the weekend. Furthermore, Chinese crude processing in…
Join EnergyScan