The warmer temperatures strongly dampened the French power consumption which dropped by 5.81GW from Friday to 72.71GW on average. The country’s nuclear production faded by 3.11GW to 44.41GW due to the Cattenom 3, Chooz 2 and Gravelines 6 reactors being stopped over the weekend. As expected, the German wind generation jumped to 24.14GW on average (+11.64GW dod) but should ease to around 16GW today, before rising to around 23GW tomorrow.

EUAs climbed to a fresh record high of 40.64€/t at the market open on Monday, likely buoyed by the momentum from Friday’s sharp rise and the bullish oil and financial markets. The carbon prices however retreated afterward throughout the day and dropped back below 40€/t amid a weaker energy complex and forecasts of milder weather. The downward move was only temporarily curbed in the morning by the auction which cleared with a 0.03€/t premium to the secondary market and a significant 1.98 cover ratio. Most analysts have a neutral outlook for carbon prices this week and expect prices to hover between 38€/t and 40€/t as the latter should remain a strong psychological resistance while the market remains supported by the late compliance companies and the participants’ anticipation of a tighter supply over the phase 4 of the system. Profit-taking following the massive rally of emissions that brought prices up by nearly 23% from late January is however not to be excluded.

The power curve prices were mixed on the first session of the week. If the near-term contracts posted losses on the back of the weaker underlying gas prices and forecasts of above-average temperatures for the upcoming weeks, the early gains of emissions provided enough support for power long-term prices to edge up. 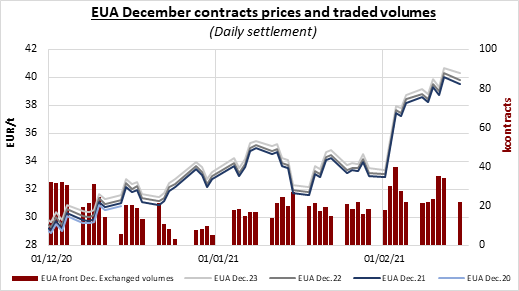 A calm end of the week for the energy markets

European equity markets caught up yesterday while Asian markets were optimistic for unconvincing reasons: the upcoming departure of the Japanese Prime Minister would pave the way for…