The forecasts of strong renewable production offset the expectations of higher power demand induced by the falling temperatures and pressured the European power spot prices for today. Prices eroded 5.46€/MWh from Friday to 46.07€/MWh on average in Germany, France, Belgium and the Netherlands.

The French power consumption eased to 61.02GW on average on Friday, -2.12GW dod as temperatures slightly rose from the day prior. The nuclear production edged up to 49.31GW, +0.12GW from Thursday. The German wind production strengthened by 1.42GW to 17.16GW on average over the last working day of the week and surged over the week end, reaching up to 32.93GW on average on Sunday, but should quickly drop back around 10GW by tomorrow.

EUA climbed once again to a fresh record price of 38.73€/t on Friday as the speculative bulls continued to drive the market despite low buying interest from the compliance players materialized by the weak result of the morning’s auction. The primary market’s sale indeed clear with a massive 0.34€/t discount to the secondary market (although much lower than Thursday’s differential) and a quite average 1.69 cover ratio. If prices slightly corrected after the auction, they reverted in the afternoon, possibly finding support in the stronger gas, oil and equity markets and the forecasts of temperatures dropping below normal this week. The EUA Dec.21 contract eventually settled at 38.20€/t with a huge 5.25€/t (+15.9%) weekly gain.

On the policy side, the EU Parliament’s ENVI committee back a WTO-compatible EU carbon border adjustment mechanism (CBAM) on Friday, aiming at placing a carbon price on “imports of certain goods from outside the EU, if these countries are not ambitious enough about climate change”. However, the CBAM still need the support from the full EU Parliament and EU Council to become law.

The stronger gas and surging emissions prices continued to push the power curve prices up on Friday, with the largest gains seen in the near-term contracts. 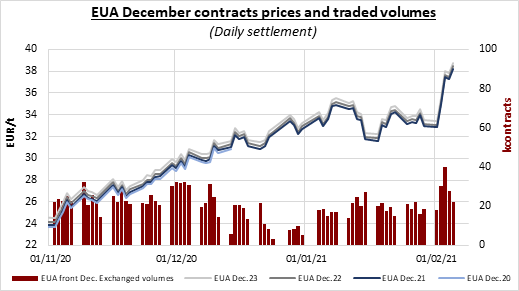 The power spot prices surge near 170€/t yesterday in northwestern Europe, with some baseload contracts reaching levels not seen since 2006/2007 as forecasts of dropping…

The European power spot prices were mixed yesterday, sharply rising in France, Belgium and the Netherlands due to the surging gas prices, but edging down…