The low temperatures continued to strengthen the French power consumption yesterday which rose by 2.43GW from Monday to 77.91GW on average. The country’s nuclear generation steadied at 51.16GW, -0.04GW from the day prior. The German wind production eased by 1.20GW to 16.79GW on average and should fall by around 6GW today.

EUAs continued to erode Monday morning’s sharp gains, pressured by profit-taking, forecasts of milder and windier weather from mid-January and an overall weaker energy complex combined with losses in the European financial market. Most market participants seem however to keep their short-term bullish outlook for carbon prices, pointing to the limited downward potential due to the supply shortage started on Dec.15th and schedule to last until Jan.29th. The EUA Dec.21 contract eventually settled at 32.96€/t, -0.73€/t from Monday. The power prices posted hefty losses along the curve yesterday, pressured on the far curve by weaker fuels and emissions prices while short-term contracts were driven down by the forecasts of milder temperatures and stronger renewable production. 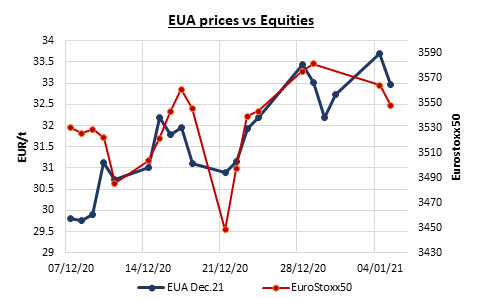 Falling fuel prices drove the power prices down, but a rebound might loom

European prices up on the spot and the curve

This website uses cookies to improve your experience while you navigate through the website. Out of these, the cookies that are categorized as necessary are stored on your browser as they are essential for the working of basic functionalities of the website. We also use third-party cookies that help us analyze and understand how you use this website. These cookies will be stored in your browser only with your consent. You also have the option to opt-out of these cookies. But opting out of some of these cookies may affect your browsing experience.
Necessary Always Enabled
Necessary cookies are absolutely essential for the website to function properly. This category only includes cookies that ensures basic functionalities and security features of the website. These cookies do not store any personal information.
Non-necessary
Any cookies that may not be particularly necessary for the website to function and is used specifically to collect user personal data via analytics, ads, other embedded contents are termed as non-necessary cookies. It is mandatory to procure user consent prior to running these cookies on your website.
SAVE & ACCEPT
Thank you for subscribing to our newsletter​