European gas prices extended gains yesterday, still supported by concerns on weak supply and low stock levels. Russian flows were slightly up, averaging 297 mm cm/day (compared to 296 mm cm/day on Wednesday), but still below the levels of end August (313 mm cm/day). As expected, Norwegian flows rebounded, to 284 mm cm/day on average, compared to 263 mm cm/day on Wednesday, as some planned maintenance works ended. The rise in Asia JKM prices (+1.56% on the spot, to €58.153/MWh) and in parity prices with coal for power generation provided additional upward pressure.

Moreover, comments from a Russian official saying that pumping commercial natural gas supplies via the Nord Stream 2 gas pipeline will not start until a German regulator gives the green light (a process which could last several months) did not help ease the bullish momentum.

The market is waiting for clear signs of an increase in Russian flows in the coming weeks. For the moment, it does not see them and comes to the conclusion that Europe is obliged to enter into aggressive competition with Asia to attract LNG cargoes to replace the missing pipeline supply. Additional price increases are therefore likely for European gas prices. Only profit taking by financial participants and technical resistances (€57.515/MWh on TTF October 2021 and €37.739/MWh on TTF Cal 2022) seem able to calm the upward pressure. 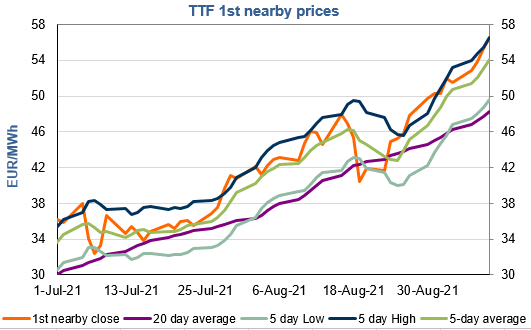 Brent prompt future contract significantly recovered yesterday, to reach 64.7 $/b. Crude prices were boosted by rumours that OPEC members could roll over the current production…

European prices up on the spot and the curve