Brent prompt futures contract hiked to 54 $/b on early Tuesday, up by about 5%, as OPEC surprised market participants by reducing February output. The twist came from Saudi Arabia who decided to unilaterally cut production by 1 mb/d in February while allowing Russia and Kazakhstan to marginally increase their production for February and March. Other countries will rollover production cuts, until March when the group is meeting again. 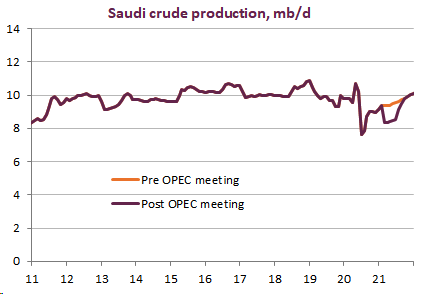 Crude oil prices posted significant losses on Wednesday as the IEA announced an additional 60 Mb release from strategic stocks of its members, on top of the…

European gas prices were up overall yesterday as the weakness in Russian supply (stable yesterday at 104 mm cm/day on average, with Nord Stream 1…