Despite a bullish start on prospects of steady gas for power demand after a further downward revision in the 2022 French nuclear output target by EDF, European gas prices ended Tuesday’s trading session in negative territory as the risk premium linked to the Russia-Ukraine-NATO clash started to be slashed in the afternoon after the French President Macron stated that he obtained from Vladimir Putin that there would be no “deterioration or escalation” of the crisis over Ukraine. TTF March 22 prices traded as high as €83/MWh in the morning before a sharp drop to an intraday low at €74.60/MWh towards the close.

Prospects of mild and windy weather combined with strong coal and EUA prices could drag TTF front-month prices closer to the upper part of a rising coal-to-gas switching range which could act as a first fundamental support in the short term (currently around €70/MWh for the highest efficiency gas plants). Indeed, coal supply issues in the Pacific Basin led to a jump in Newcastle API6 month-ahead prices by more than $30/ton since 1 Feb on the back of tightening constraints on Indonesian coal producers which do not respect their Domestic Market Obligation (DMO) while domestic prices are rising in China. Strong EUA prices with the €100/ton target in sight could keep the coal-to-gas switch in the  upward direction. Otherwise, any development in the Russia-Ukraine-NATO conflict could continue to provide direction on the curve.

Brent corrects as the dollar rallies 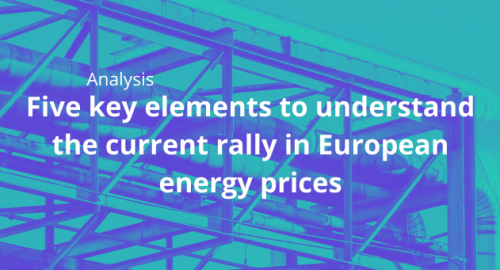