Scarcity in the U.K. and forecasts of dropping wind output strongly lifted most of the NW European power spot prices, with the German prices gaining up to 28.11€/MWh from the day prior to 70.58€/MWh. The lower power demand expected today in France today however weighed on the country’s prices which eroded 0.52€/MWh to 73.33€/MWh.

The French power consumption continued to fall with the rising temperatures, dropping by 5.86GW on day to 71.68GW on average. The nuclear production faded by 0.99GW to 49.92GW amid two unplanned outages at the Cattenom (1.3GW) and Blayais 1 (0.9GW) reactors. Both units however restarted in the evening. The hydro generation increased by 0.32GW to 5.49GW but is expected to waned back today as the nuclear availability should improve in the upcoming hours, although the energy workers strike announced earlier this month scheduled today could limit the gains.

The German wind production further soared to 34.79GW on average (+4.65GW dod) but is forecast to drop to around 15GW today and reach 5GW by Saturday, before starting to surge back over the following days.

The carbon prices fell significantly on Wednesday, driven by the strong retreat of gas prices amid profit taking and forecasts of milder weather, with additional pressure from the dropping oil prices and early weakness in equities. EUAs dropped as low as 33.07€/t, -1.59€/t from Tuesday’s settlement, but managed to slightly rebound in the last hour of trading after reaching the 20-day moving average technical support, with possible help from a late upward move of equities. The EUA Dec.21 contract eventually closed at 33.65€/t, -1.01€/t day-on-day.

Plunging gas and carbon prices heavily pressured the power forward market which posted hefty losses along the curve yesterday. The near-curve contracts presented the largest losses due to the significant pullback of the underlying gas contracts. 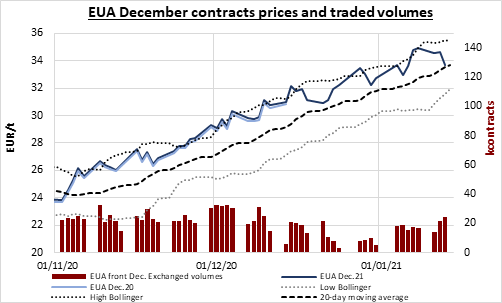 The US, EU, UK and some of their allies have announced retaliatory measures against Russian interests after Vladimir Putin recognised the independence of the two breakaway republics…

Early this morning, the Russian President announced the launch of a military operation to assist the separatist republics of the Donbas and overthrow the Ukrainian regime.…
Join EnergyScan