The power spot prices for today rose to levels similar to Friday amid forecasts of mixed fundamentals with a weaker renewable generation expected to be offset by an improved French nuclear availability and lower power demand. The day-ahead prices hence reached 88.88€/MWh on average in Germany, France, Belgium and the Netherlands, +0.59€/MWh from Friday.

The EUAs hit a 7-week intraday low of 49.99€/t on Friday with thin exchanged volumes as a disappointing auction in the morning and rumors that some European Union countries had started handing out their free allowances pressured the market. The carbon prices however rebounded in the afternoon as the near 50€/t level once again attracted dip-buyers, driving the bellwether contract back up to settle the day at 50.89€/t, +0.10€/t from Thursday but -2.00€/t (-3.8%) from the previous week.

The power curve prices were mixed over the last session of the week, the short-term contracts reflecting the losses of the underlying gas prices while the back-end of the curve posted some gains thanks to the support of the rising gas calendar contracts and late recovery of emissions. 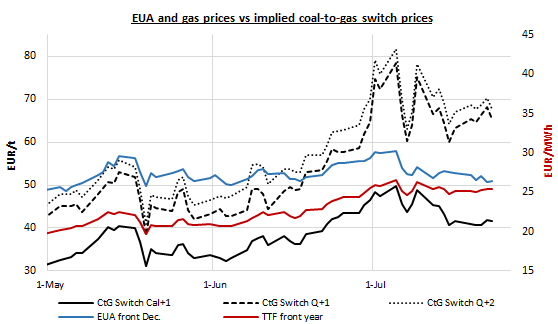 At the end of a volatile day, oil closed lower. ICE Brent for September delivery (the new front month) settled at $109.03/b, that is a…

European gas prices were up overall yesterday, still supported by uncertainties on Russian supply and LNG flows (following the shutdown of the US Freeport LNG…

For the first time since the beginning of the year, US consumer spending contracted in real terms (deflated for inflation) in May, amplifying recession fears and the downward…
Join EnergyScan