The power spot prices dropped further in north western Europe yesterday amid forecasts of milder temperatures and stronger wind production. Prices fell by 8.49€/MWh to 36.56€/MWh on average in Germany, France, Belgium and the Netherlands.

The 6°C above-average temperatures continued to dampen the French power consumption yesterday which dropped by 1.95GW from Monday to 55.83GW on average. The country’s nuclear generation faded as well to 41.92GW, -0.59GW dod. On the other hand, the German wind production strengthened by 3.14GW to 17.34GW on average, and should reach more than 21GW today. Before starting to ease back over the upcoming days.

EUAs traded sideways on Tuesday, pressured by profit taking, weaker oil and fading equities on one side but supported by stronger gas prices, speculators and the nearing compliance deadline on the other. A final rebound at the end of the session pushed the EUA Dec.21 contract to settle at 38.67€/t with a 0.71€/t daily gain. The morning’s auction cleared with a narrow 0.06€/t discount to the secondary market and decent 1.86 cover ratio, but failed to support the carbon market in the aftermath of the sale.

The power prices posted moderate gains along the curve on Tuesday, lifted by stronger underlying gas prices, and the late upward move of emissions. 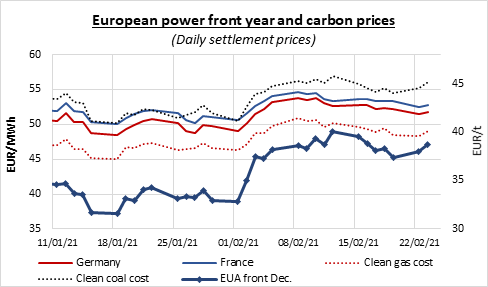 The ICE Brent Dec-21 contract is consolidating at the 85 $/b, at odds with the rally in US equity markets, which usually boosts commodity prices. Indeed, the recent…

Fear of the delta variant prevails

After US equities recorded their first decline in 4 weeks last week, Asian markets fell on growing concerns over the quick spread of the Covid delta…
Join EnergyScan