The NW European power spot prices continued to rise amid dropping temperatures and weak renewable production. Prices reached 79.53€/MWh on average in France, Germany, Belgium and the Netherlands, +8.51€/MWh from the day prior and way above the clean gas and coal costs respectively at 52.78€/MWh and 52.11€/MWh.

The French power consumption further strengthened on Thursday due to the below-normal temperatures, climbing to 79.02GW on average (+0.83GW dod). The nuclear generation also improved by 0.19GW to reach 51.70. The German wind production continued to ease at 7.33GW on average, – 4.03GW day-on-day, and should drop as low as 4GW by tomorrow before surging back over the following days.

EUAs extended their rebound started late on Wednesday and climbed steadily throughout the day, driven by the stronger energy complex and a downward revision of next week’s temperatures, to eventually close at 34.76€/t with a hefty 1.13€/t daily gain just after hitting a fresh all-time high of 34.86€/t. Bullish signals from the oil and financial markets and the lingering lack of auction supply provided additional support to the carbon market.

The power prices posted significant gains along the curve, lifted by the steep rise of gas and carbon prices, the largest being seen in the short-term contracts with the French and German front-month prices surging by respectively 5.64€/MWh and 4.01€/MWh from the prior session. 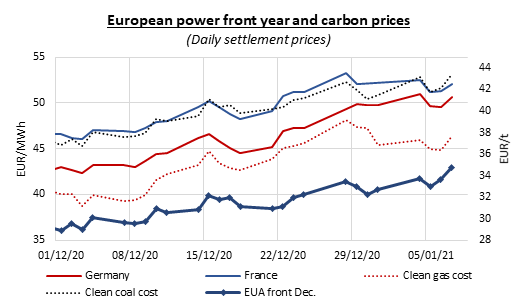 No nasty surprise with the Fed minutes

The release of the Fed minutes did not have any significant impact on markets, as the overall message remained strongly dovish, in line with consensus…

Second attempt for the Parliament

The European power spot prices were mixed yesterday, lifted in Germany and France by the higher fuel and carbon prices but down in Belgium and…
Join EnergyScan