Lifted by the expectations of colder temperatures, the European power spot prices slightly rose yesterday despite the forecasts of higher wind output and nuclear availability. Prices hence reached 54.13€/MWh on average in Germany, France, Belgium and the Netherlands, +2.37€/MWh day-on-day.

The French power consumption eased by 0.76GW on Wednesday to 58.76GW on average. On the other hand, the country’s nuclear generation increased by 1.34GW to 41.39GW. The German wind production started to rise back to reach 6.13GW on average (+2.15GW dod) and should climb to around 10GW today but ease tomorrow.

EUAs opened at their middle Bollinger band on Wednesday, but quickly fell below and eroded most of Tuesday’s gains throughout the day, tracking the bearish energy complex with pressure from the forecasts of surging wind output for next week and the return of several French nuclear reactors in the upcoming days. The morning auction clear with a 0.12€/t discount to the secondary market but a decent 1.83 cover ratio. If the Commitment of Traders presented only slight moves in the market participants total net position last week, it showed a further increase in the number of financial players in the secondary markets, with the “number of persons holding a position” in the “Investment Funds” category rising by 12 (+5.1%) in one week, this category now representing 38.4% of the secondary market participants.

Weaker gas and emissions prices weighed on the power prices which posted moderate losses along the curve. 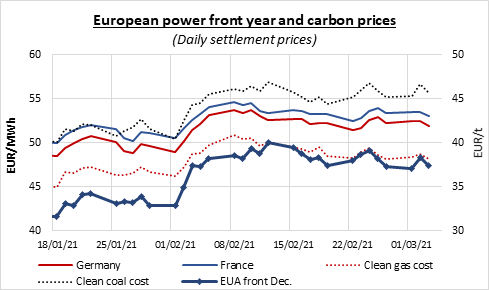 Adverse weather in the Gulf Coast could limit the crude intake

ICE Brent prompt contracts declined by a dollar, as prompt month time spreads dropped by 15 cents. The rise in the Eurodollar exchange rate did…

The power spot prices soared near 230€/MWh in northwestern Europe for today, lifted by forecasts of higher demand and weak wind and solar generation. The…