EUAs retreated after an early jump

The European power spot prices continued to fade yesterday amid forecasts of milder and windier weather. Prices hence eroded 5.05€/MWh to 38.89€/MWh in France, Germany, Belgium and the Netherlands while clean gas costs lingering 3.13€/MWh above the clean coal costs at 53.83€/MWh.

The French power consumption eased by 4.02GW to 69.53GW on average as temperatures pursued their rise. The nuclear generation however slightly improved to 48.45GW, +0.44GW day-on-day. The German wind production continued to surge at 36.89GW (+3.78GW dod) and should reach nearly 40GW on average today before starting drop from tomorrow.

EUAs mirrored the gas market evolution on Wednesday with an early jump also supported by the bullish equities pushing carbon prices up to 33.70€/t at the market open, before fading back throughout the remaining of the day, pressured by a similar weakness in gas prices and eventually settle below 33€/t at 32.91€/t, -0.18€/t from Tuesday.

The power curve prices were mixed on Wednesday, the near-term contracts extended losses to reflect the weaker underlying fuels contracts while further on the curve prices posted slight gains supported by the early rise of the gas and carbon markets. 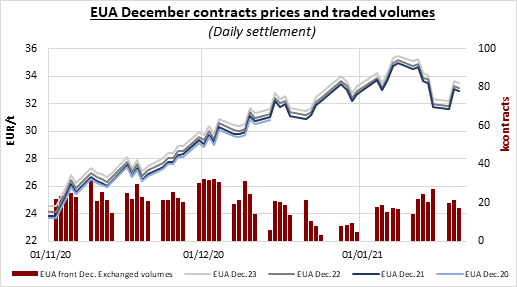 Central banks are starting to move

There is a BoE meeting today. While some expect some changes in its QE policy, the consensus remains on stability. One after the other, Fed…

A further rate cut is expected in Turkey

It is almost certain that the Turkish Central Bank will announce a 3rd consecutive and significant rate cut today (-100 to -150bp). Since September, the key rate…