EUAs retreated after a bullish opening

The French power consumption strengthened by 2.85GW from Friday to 59.41GW on average. The nuclear production fell by 3.91GW to 39.21GW as several reactors went offline over the weekend. The German wind generation eased by 1.73GW compared to Sunday to 3.86GW on average but should start to rise back from tomorrow.

EUAs rose by 0.60€/t over the first hour of trading on Monday, lifted mostly by the bullish equities, but the 5-day and 20-day moving averages capped the gains and prevented the prices from getting back in their upward trend range. Despite the stronger financial and fuels markets, the emissions prices quickly reversed afterward and fell back throughout the remaining of the day, progressively eroding their early gains and eventually settling at 37.13€/t with a slight 0.15€/t daily loss. Overall, the carbon prices continue to look for directions, with the near-end of the cold season already reducing the influence of the weather on the market. If the gas generators margins improved recently (although remaining negative for most of the front months contracts), the clean dark spreads linger in negative territory which is likely to limit the EUA demand from utilities. On the other hand, the macro economic environment for the industry sector has spread some optimism over the past few weeks, with the last IHS Markit’s PMI Index showing a further improvement in February, albeit other economic data such as the German retail sales seem to point to a quite strong GDP contraction in Q1 2021 which could result in a pressure on the carbon market.

The power curve prices were mixed on the first session of the week, the near-term contracts posting losses amid pressure from the milder weather prospects while further on the curve prices slightly rose on the back of the high gas prices and early surge of emissions. 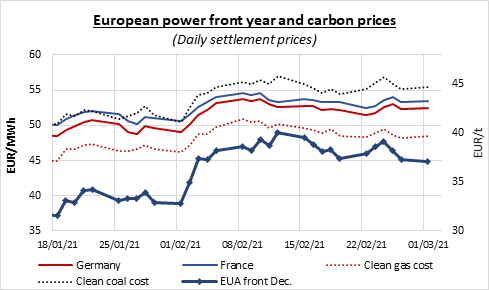 Crude prices steadied above 81 $/b for the March ICE Brent contract and front-month backwardation remained strong, above 60 cents, as Libyan output was expected…

Prices down in most European markets

Prices were lower yesterday in most European gas markets, as above-normal temperatures and the easing of the tension in Asian markets exerted downward pressure. Indeed,…

Except in France where prices inched down on expectations of weaker demand, the European power spot prices slightly rose yesterday, buoyed by forecasts of dropping…
Join EnergyScan