The European power spot prices were mixed yesterday, slightly rising in Germany and the Netherland on expectations of weaker wind output and French nuclear availability but edging down in France and Belgium amid fading power demand.

The French power consumption slightly strengthened yesterday to 64.10GW on average (+0.34GW dod) due to the temporarily lower temperatures. The country’s nuclear generation faded as well to reach 43.89GW and drop to around 43GW today. The German wind production eroded 1.63GW to 23.79GW on average and should ease further to around 20GW today.

EUA prices overall traded rangebound yesterday, failing to fall below 38€/t amid market participants withholding their allowances ahead of the nearing compliance deadline and support from dip buyers despite the bearish pressure from the fading oil and equity prices. Yesterday’s auction cleared with a 0.16€/t discount to the secondary market a 1.61 bid coverage, the lowest for over a week. The analysts’ opinions on the short-term outlook of carbon are quite divergent, some seeing EUAs test again the 40€/t level with support from late compliance activity while are viewing more downside potential due to auction resumption and negative clean fuel spreads.

The power curve prices were rather stable on Thursday, torn between an early weakness of emissions an slightly higher underlying gas prices.

Meanwhile, according to EDF the commissioning of the planned 1.6GW Flamanville 3 nuclear plant could be further pushed back from 2023 as a result of delays in French nuclear watchdog ASN’s final approval for the project. 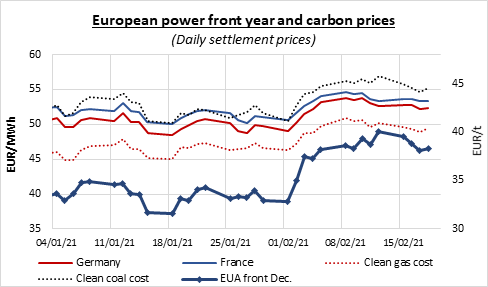 Extraordinary volatility in crude oil prices, with Brent crude losing $26 intraday. It touched $105 after rising to $139 earlier this week. But things are…

Brent 1st-nearby briefly fell back below $120/b yesterday before rising again and now trading above $126/b. The price levels are so high that one gets used…

Caution grows before the Fed

The surprise rebound in US retail sales in August (+0.7% m/m), as the variant delta extended its grip on the south and centre of the country, has…
Join EnergyScan