The European power spot prices slightly faded yesterday amid forecasts of higher temperatures dampening the demand, but managed to remain above both clean gas and coal costs. Prices hence eased by 2.50€/MWh from Tuesday in Germany, France, Belgium and the Netherlands to reach 54.74€/MWh on average.

The milder temperatures curbed the French power consumption on Wednesday which dropped by 3.43GW to 72.90GW on average. The country’s nuclear generation rose by 0.53GW yesterday to 49.94GW, but the strike actions from the energy workers started in the evening is likely to dampen the availability in the upcoming hours. The German wind production was overall steady at 13.95GW on average (-0.40GW dod) but should ease to around 11GW, before soaring to 21GW tomorrow.

EUA fell throughout yesterday, pressured by the dropping equities and the imminent resumption of carbon allowances auctions with heavy volumes scheduled to be sold in February. A late surge of oil prices however reserved the trend and lifted back the European energy complex at the end of a the day, pushing EUA prices above 33€/t to eventually settle at 33.28€/t with only a 0.07€/t loss from the day prior.

The power prices posted moderate losses along the curve, weighed by the early weakness of the gas and carbon markets.

In other news, EDF has extended an outage at its Flamanville 1 nuclear reactor (1.3GW) by a month to the end of March. 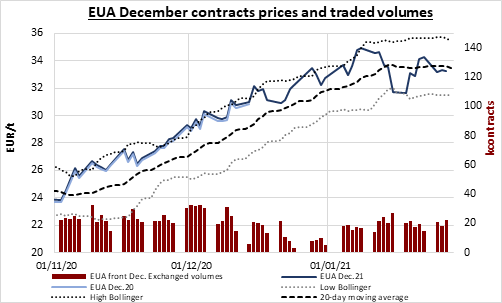 Indian sales grow, but at a slower pace

Crude prices remained range-bound for the end of this week, at around 69.5 $/b as the dollar eased due to improving prospects for European economies.…

Prices strongly up after Russia cut supplies to Poland