The power spot prices in north western Europe were mixed yesterday, slightly up in Germany and France but a bit lower in Belgium and the Netherlands. Prices reached 61.11€/MWh on average in the four countries, +0.57€/MWh day-on-day.

The French power consumption slightly eased compared to Friday due to the milder temperatures and reached 63.20GW (-1.10GW). As expected the country’s nuclear generation faded by 1.13GW to 43.95GW. The French run of river generation also dropped to 4.70GW, -1.05GW from Friday. The German wind production dropped by 17.01GW from Sunday to 10.34GW on average and should ease further to around 7GW today.

The EUA prices sharply rebounded on Monday, lifted once again by the stronger energy complex and the US equities which posted hefty gains over the first session of the week and ignoring the potential impact (although expected rather limited) on the power demand of several countries such as Germany and France tightening their anti-covid restrictions. The EUA Dec.21 contract eventually closed the day with a 0.87€/t gain from Friday at 42.84€/t. The market participants’ view on the short-term evolution of carbon prices seems quite mix currently, some expecting more gains in the upcoming days as EUAs remain in their upward trend range and the late compliance players are likely to provide support until the late April compliance deadline, while others are pointing to the warmer weather forecasted for the upcoming weeks and mostly unsupportive clean dark and spark spreads.

In other news, EDF has announced it will keep two of the four 500MW units at the West Burton A coal-fired station in the UK on line until September 2022, a year later than expected. 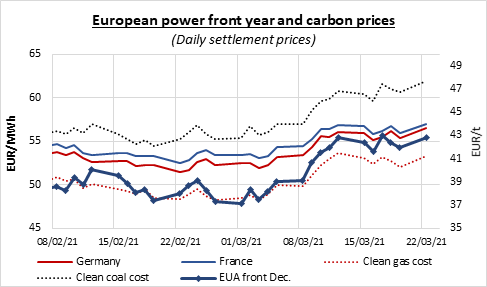 Financial markets came out of their torpor yesterday, as optimism came back with a vengeance. The release of good US economic reports as well as…