The European power spot prices edged down yesterday, possibly weighed by the expectations of improved nuclear availability and higher hydro production, although the forecasts of weaker wind output and lower temperatures may have limited the losses. Prices hence reached 51.26€/MWh on average in Germany, France, Belgium and the Netherlands, -2.87€/MWh day-on-day.

The French power consumption remained rather stable yesterday at 58.66GW on average, -0.10GW from Wednesday. The country’s nuclear production continued to rise and reached 42.53GW, +1.15GW from the day prior, but should ease tomorrow before surging above 44GW on Sunday. The German wind generation increased as well on Thursday by 3.99GW to average 10.12GW, but should slightly fade to around 7.50GW today and progressively rose over the weekend.

EUAs presented a bearish morning yesterday, driven the weakening equity and oil prices. The EUA Dec.21  contract however strongly rebounded in the afternoon after hitting its lower Bollinger band and a day low at 36.65€/t. On top of its technical aspect, the sharp recovery of carbon prices is likely to have been induced as well by the surging oil prices from mid-day, the slight rebound of European equities and the stronger gas prices, defying the plunging US financial markets. Montel also reported some potential support from short covering triggered when prices reached their technical support in the morning. Meanwhile, the Common auction cleared with a 0.08€/t discount to the secondary market and average 1.80 cover ratio, giving little direction to the bellwether contract.

Lifted by the bullish gas prices and late rebound of emissions, the power prices posted moderate gains along the curve on Thursday. 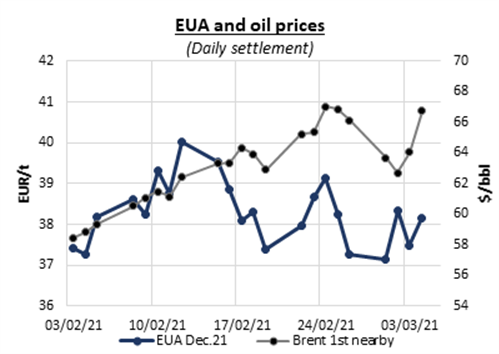 EUAs gave back gains after hitting a fresh intraday record

If the power spot prices rose by 16.33€/MWh on average in France, Belgium and the Netherlands to 225.64€/MWh amid expectations of stronger power consumption and…

European gas prices dropped yesterday as the impact of the halt in Russian deliveries to Poland and Bulgaria started to fade. The strong LNG supply…

A wave of panic swept through the financial markets on Friday in a context of low liquidity. The announcement of the emergence of a new variant,…
Join EnergyScan