The power spot prices in north western Europe slightly rose yesterday, lifted by the falling wind output and temperatures and the expectations of weaker French nuclear availability. Prices hence gained 1.46€/MWh to reach 47.63€/MWh on average in Germany, France; Belgium and the Netherlands.

The lower temperatures strengthened the French power consumption on Thursday which rose by 0.68GW day-on-day to 55.47GW on average. The nuclear generation improved as well to 43.13GW, +0.83GW dod. On the other hand, the German wind production continued to ease and averaged 15.69GW, -3.02GW from Wednesday.

After climbing up to 39.68€/t in the first hour of trading, the EUAs observed a strong bearish session on Thursday, driven by profit taking, an unsupportive energy complex and weaker oil and equity prices. CO2 prices had already eroded 1.05€/t from the morning’s peak when a drop in the financial markets pushed carbon prices further down by nearly 0.50€/t over the last hour of the session. The EUA Dec.21 contract eventually settled at 38.26€/t, -0.89€/t from Wednesday and below their upward trend range and 5-day moving average technical support. The strong auction clearing almost in line with the secondary market and an above-average 2.00 bid coverage temporarily supported the carbon market but was not enough to reverse the fall of prices.

The power curve prices opened higher yesterday, and although the pressure from the bearish gas and carbon prices eroded most of the early gains, most of the future contracts eventually closed with moderate gains from the day prior.

In other nuclear news, according to the country’s nuclear safety watchdog ASN, France’s oldest units could operate for up to 50 years, 10 years longer than their initially planned lifespan. 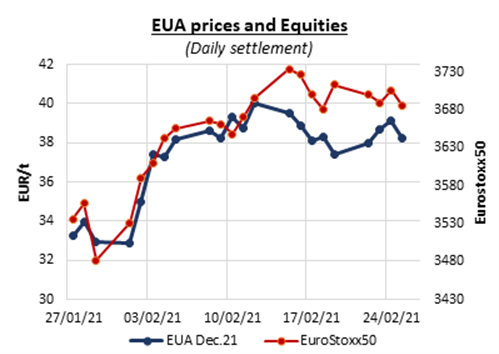 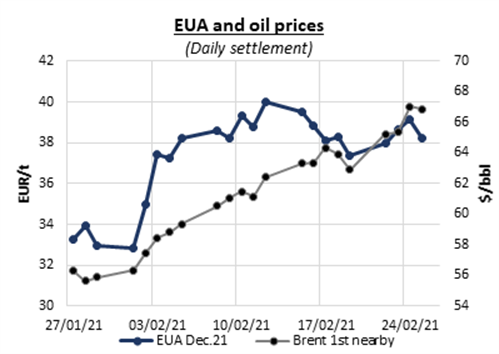