EUAs extended their rebound for a third straight day

The European power spot prices rebounded yesterday on forecast of weaker wind output and lower temperatures. Prices hence rose by 9.61€/MWh from the day prior to 46.17€/MWh on average in Germany, France, Belgium and the Netherlands, but remained below the clean gas and coal costs.

The French power consumption eased by 1.04GW to 54.79GW on average on Wednesday, but should increase to around 57GW today. The country’s nuclear generation improved by 0.39GW to 42.31GW. The German wind output jumped by 4.29GW to 21.62GW on average, but is expected to drop below 16G today and to continue fading in the upcoming days to eventually reach near 3GW by next Tuesday.

EUAs climbed further in their upward trend range yesterday with support from the stronger energy complex and bullish signals from the oil and financial markets. A late jump of emissions prices brought the Dec.21 contract to settle at 39.15€/t, +0.48€/t dod. The last three straight bullish sessions of emissions prices suggest that last week’s retracement was only a temporary pull back and several market participants are now expecting the bulls to push the carbon prices towards their all-time high of 40.64€/t reached on Feb.15th. The option market seems to favor this view as well by presenting a sharper rise of call option open interest than of put options. Wednesday morning’s auction was also supportive by clearing with a narrower 0.01€/t discount to the secondary market (compared to 0.06€/t on Tuesday) and higher 1.96 cover ratio. The fuel complex is however reflecting a lack of buying interest from compliance players (other than those late for their 2020 compliance) with the coal generator margins lingering in negative territory along with most of the front months clean spark spreads. Meanwhile, the last Commitment of Traders report confirmed that last week’s correction was mainly induced by the speculators taking profit by presenting a 6.7mt weekly reduction in the investment funds’ total net long position, although the companies with compliance obligations may have also participated by reducing further their net long position by 4.9%.

Stronger fuels prices and bullish emissions lifted the power forward market on Wednesday, the power prices hence posting gains along the curve with the largest seen on the back-end. 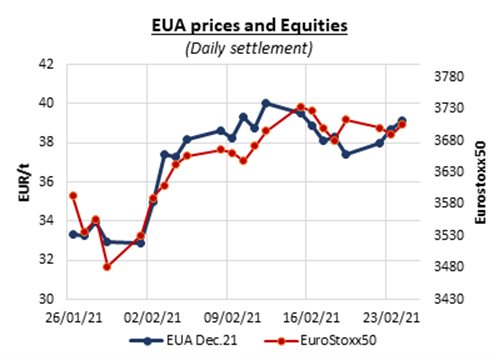 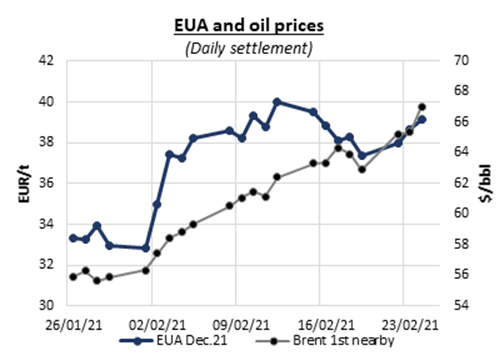 ICE Brent and WTI’s entire forward curve sold off yesterday by about 3$/b, as the whole commodity complex suffered from a continued rise of the dollar.…