EUAs climbed back above 34€/t

Forecasts of colder temperatures and dropping wind output supported the European power spot prices yesterday which presented a hefty 10.37€/MWh gain from the day prior to climb to 49.25€/MWh on average in Germany, France, Belgium and the Netherlands.

The French power consumption eased further to 67.17GW on Thursday, -2.36GW from the day prior. The country’s nuclear generation fell as well by 1.27GW to 47.18GW, mainly due to a “significant and unpredictable presence of fish in filter drums in the pumping station, in the non-nuclear part of the installations” in two of Paluel reactors which forced EDF to shut down all four reactors of the power plants late on Wednesday. The German wind production rose for a last day to reach 39.34GW on average, but should drop down to around 26GW and further to 9GW by tomorrow.

EUAs soared by 1.20€/t on Thursday, likely buoyed by the forecasts of cold weather combined with weak renewable production until next Wednesday with additional support from the early strength of the oil and financial markets and possibly some technical buying triggered after emissions prices broke above their nearest technical resistance in the morning. The EUA Dec.21 eventually closed at 34.11€/t, but the short term outlook of the carbon market remains quite bearish with the imminent return of the daily auctions and the significant volumes of allowances scheduled to be sold in February to compensate for the delayed restart of the sales.

The power prices posted moderate gains along the curve yesterday, supported by the carbon prices rally and the slightly rising underlying gas contracts. 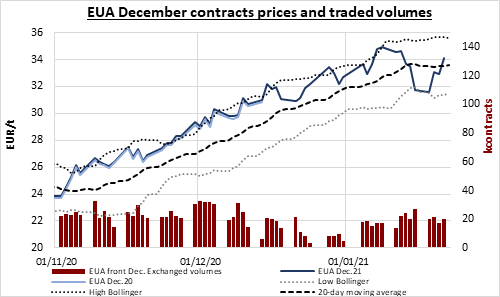 Recovery hopes and vaccination progress to the rescue

Confidence seems returning a bit on financial markets thanks to good economic indicators and hopes of acceleration in the vaccination campaigns. Bond yields edged up…

Oil prices are retreating, but Brent 1st-nearby was still above $93/b yesterday. It is back to $91/b, mainly due to the widespread correction in risky assets after…
Join EnergyScan