EUAs climbed back above 34€/t in a last minute rebound

The European power spot prices for today climbed back above the clean gas and coal costs, pushed up by forecasts of weak wind production and below average temperatures, although expectations of improved French nuclear availability limited the gains.

The French nuclear consumption steadied last Friday at 67.22GW on average, only +0.05GW dod despite the dropping temperatures. The country’s nuclear generation however improved by 1.13GW to 48.31GW on average, and should rise above 51GW today.

Emissions finally broke their recent strong correlation with the gas market on Friday. The EUA benchmark contract Dec.21 eroded nearly 0.50€/t over the first hour of trading, pressured by an early drop in equities and oil prices, before remaining mostly stable throughout the day. Carbon prices however jumped back above 34€/t with a 0.55€/t gain just before market close, likely supported by the financial and oil markets late recovery. Most market participants however saw limited upside potential for this week with the EUA auction resumption set on Friday and the heavy volumes scheduled to be sold in February (+7.6m allowances compared to Feb.2020) to compensate for the delayed restart which doubled the end-of-year auction break due to technical reasons.

The power curve prices were up over the last session of the week, lifted by the early jump of gas prices with the largest gains seen on the short-term contracts. 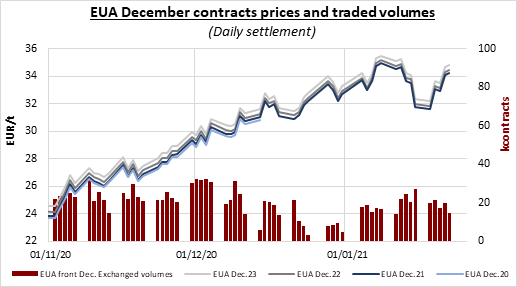 The decision was expected: the Fed raised its Fed funds rate by 25bp. It will also soon start draining liquidity from the market. It has significantly…

Lost hydrocarbon in the US reaches 1.1 mb/d

Brent prompt future contract slipped back to 67.3 $/b as the lost US production was estimated to be at 1.1 mb/d for last week. The picture…
Join EnergyScan