Forecasts of soaring wind output strongly pressured the European power spot prices for today which dropped by 24.40€/MWh from Friday in Germany, France, Belgium and the Netherlands to 55.13€/MWh on average.

The below-normal temperatures continued to support the French power consumption on Friday which reached 79.03GW on average, +0.01GW day-on-day. The country’s nuclear generation remained steady as well with only a 0.02GW decrease to 51.68GW. The German wind production continued to ease to average 5.24GW (-1.12GW dod) and dropped further to 2.76GW on Saturday, before starting to surge back the next day. The production is forecast to reach around 34GW by Wednesday, which should pressure the power spot prices in the upcoming couple of days.

Cold weather prospects, the lack of auction supply and bullish signals from the oil and financial markets pushed EUA prices above 35€/t to a new high of 35.20€/t on Friday. Emissions prices eroded 0.50€/t in the afternoon but managed to rebound in the last hour of trading to settle the day at 34.92€/t, +0.16€/t day-on-day and +2.20€/t from the week prior. Several market participants are now expecting a profit-taking induced correction in the upcoming days, especially with temperatures forecast to rise tomorrow, although the colder weather expected at the end of the week could lift prices back above 35€/t afterward.

Carbon prices are likely to present a downward correction with the restart of the EUA auctions on January 29th, particularly if it is combined with warmer temperatures. However, most market players are keeping their bullish outlook for the year considering the tighter Phase 4 supply and doubt prices could drop below 30€/t.

The power forward prices tracked the stronger gas and carbon markets and posted gains along the curve with the largest on the near-curve contracts. Spanish contracts were however decorrelated from the other North Western European markets and extended losses along the curve, the market taking a breath following its recent sharp rise. 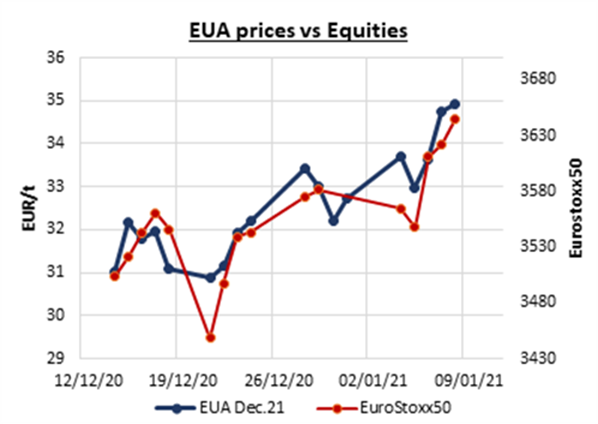 US futures have rallied overnight, but for now it is only a hypothetical rebound after a sharp downward correction in US equities last week, particularly…

The Brent contract change has caused the 1st-nearby to lose nearly $2/b due to the extremely sharp backwardation. It is trading below $89.5/b this morning. Backwardation…