The French power consumption eased to 57.78GW on average on Monday, -4.36GW from Friday and -14.93GW  week-on-week due to the temperatures rising to nearly 6°C above normal. The nuclear production was also lower at 42.50GW. The wind production faded to 14.19GW on average (-6.70GW from Friday) but should strengthen to around 17GW today and reach nearly 20GW tomorrow before starting to ease once again.

Profit taking, weaker gas prices and an early drop of equities drove the EUAs down on Monday morning to as low as 36.50€/t (-0.90€/t from Friday’s settlement). Carbon prices however sharply rebounded in the afternoon after hitting the lower Bollinger band and eroded all their earlier losses with possible support from the late surge of oil prices and recovering financial markets. The EUA Dec.21 contract eventually closed at 37.96€/t with a 0.56€/t gain from the previous session. The morning’s auction cleared in line with the previous sales with a 0.14€/t discount to the secondary market and an average 1.68 cover ratio.

The power prices posted hefty losses along the curve over the first session of the week, pressured by the dropping gas prices and the early weakness of the carbon market. 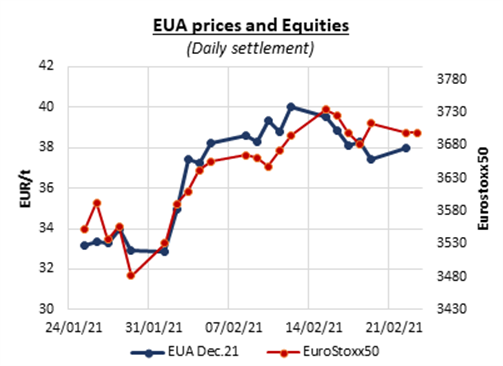 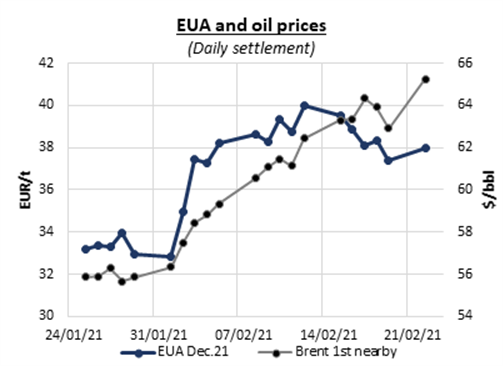 The power spot prices remained steady at 88.30€/MWh on average in Germany, France, Belgium and the Netherlands (+0.60€/MWh day-on-day) amid expectations of mostly unchanged fundamentals…

Deceleration of activity and lower interest rates in China

China’s GDP growth declined to +4% yoy in the last quarter of 2021. This is a less sharp deceleration than expected, thanks in particular to the…

Sharply higher home prices in the US. Consumer confidence is waning

The yearly growth rate in home prices is close to a 15-year high in the US and consumer confidence is showing signs of weakening. US…
Join EnergyScan

This website uses cookies to improve your experience while you navigate through the website. Out of these, the cookies that are categorized as necessary are stored on your browser as they are essential for the working of basic functionalities of the website. We also use third-party cookies that help us analyze and understand how you use this website. These cookies will be stored in your browser only with your consent. You also have the option to opt-out of these cookies. But opting out of some of these cookies may affect your browsing experience.
Necessary Always Enabled
Necessary cookies are absolutely essential for the website to function properly. This category only includes cookies that ensures basic functionalities and security features of the website. These cookies do not store any personal information.
Non-necessary
Any cookies that may not be particularly necessary for the website to function and is used specifically to collect user personal data via analytics, ads, other embedded contents are termed as non-necessary cookies. It is mandatory to procure user consent prior to running these cookies on your website.
SAVE & ACCEPT
LOG IN