EUA retreated amid weaker energy complex, oil and US equities

The European power spot prices remained mostly stable yesterday amid forecasts of lower temperatures and wind output but stronger hydro generation. Prices reached 56.71€/MWh on average in France, Germany, Belgium and the Netherlands, +0.58€/MWh from Monday but still below the clean coal costs.

The dropping temperatures continued to strengthen the French power consumption which increased by 0.90GW day-on-day to 62.45GW on average. The country’s nuclear generation slightly improved as weel to reach 44.68GW, +0.29GW dod. The German wind production fell by further 9.94GW to average 17.09GW on average, and is expected to reach 3.40GW by tomorrow before slightly rebounding over the weekend.

The EUA prices fell back below 42€/t on Tuesday, driven down by profit taking, retreating gas and oil prices and weakening US equities. The Dec.21 contract breaking below its 5-day moving average, which had materialized as a strong technical support in the recent rally of emissions, may have induced further losses in the afternoon. The last two bearish sessions of the carbon prices brought them under the “overbought” limit (RSI at 65 at the time of writing and prices back below the upper Bollinger band). This retreat could hence turn out to be only a temporary break before another attempt from speculators to push EUAs towards 45€/t. The carbon prices are however likely to need support from the financial market to pursue their upward trends considering the rather muted demand from compliance (beside the operators late for their 2020 obligations).

The bearish emissions and underlying gas prices pressured the power forward prices which posted hefty losses along the curve. 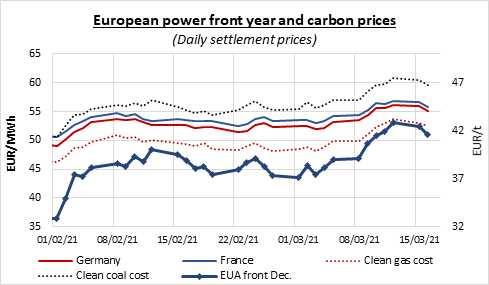 The price of Brent 1st-nearby fell back to around $116b after ending the week at around $120/b. The main reason for this decline comes from China where…

We are currently facing an IT issue. Our team is working on it. We apologize for the inconvenience. Financial markets continued to digest the massive…