The expectations of weaker nuclear availability and wind output supported the European power spot prices for today which rose to 49.08€/MWh on average in Germany, France, Belgium and the Netherlands, +1.45€/MWh from Friday’s prices.

The French power consumption further eased by 1.96GW to 62.14GW on average over the last working day of the week. The nuclear production was also lower at 45.45GW (-0.44GW dod). The German wind production faded throughout the weekend to reach 20.66GW on Sunday and should drop to around 13GW today but slightly rebound over the next couple of days.

Despite the stronger equities, the EUA prices fell below 38€/t on Friday as the mild temperatures across Europe pressured the energy complex. Several market participants are however keeping their bullish outlook for carbon prices, seeing last week’s 2.62€/t retreat only as a temporary pause in the upward trend and expecting the nearing April compliance deadline and the recent significant rise in new speculative players to support emissions prices in the upcoming weeks. On the other hand, some traders pointed at the lack of compliance players’ buying interest considering the negative gas and coal generators margins and hence questioned the sustainability of the recent speculative rally. Nonetheless, the current weather forecasts are not excluding a return to cold temperatures in March, and the recent economic data showed that the industry sector performed rather well over the past weeks (with for instance the IHS manufacturing PMI increasing by 2.9 to 57.7 in February), which could be supportive for the carbon market.

After a bullish opening, the power curve prices faded throughout the last session of the week, weighed by the bearish carbon and underlying gas prices, to eventually settle mostly flat from Thursday’s close. 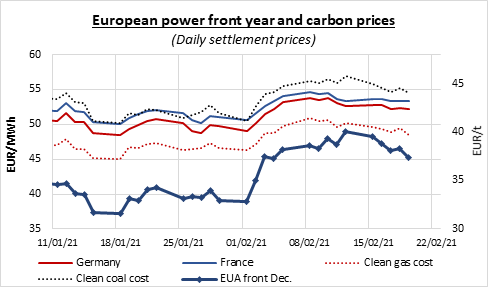 The European power spot prices rose further up yesterday amid forecasts of colder temperatures and dropping wind output. Much closer than the previous day, the…

The markets are fairly calm and should remain so. In Asia, a certain optimism prevails after the announcement of a new super stimulus plan in Japan,…