Most of the European power spot prices edged down yesterday, torn between higher nuclear availability, stronger hydro generation and weak renewable production. Only the German prices were slightly up at 72.89€/MWh (+2.31€/MWh) due to the low wind output expected today.

Above-average temperatures dampened the French power consumption on Thursday which dropped by 2.24GW to 69.44GW on average. The nuclear generation rose by 0.87GW to 50.78GW and should climb above 51GW today. The German wind production fell by 20.51GW to 14.28GW on average and should drop further to around 7GW today.

EUAs fell below 33€/t as low as 32.76€/t on Thursday morning, weighed by the tumbling gas prices and some profit taking. The emissions prices however rebounded on their technical support in the afternoon, likely buoyed by dip buyers and bullish signals from the oil and financial markets. The support around 33€/t has hold so far, with the lingering lack of supply limiting the downside potential despite several European countries tightening their measures to curb the new covid strains outbreak. Some market participants however warned that no significant profit taking has occurred yet following the massive rally of emissions observed since early November that pushed prices up by nearly 50%. The heavy supply coming in February combined with temperatures rising back to normal levels could hence push speculators that took advantage of the rally to unwind some of their long position built over the previous weeks. The overall tighter supply expected in 2021 (and the following years) is however limiting the downside potential, and most market participants are doubting EUAs could drop below 30€/t, albeit the worsening covid situation could add a significant weight on the allowance demand.

The power prices posted moderate losses on the curve yesterday, driven by the bearish gas market, early weakness of carbon prices and forecasts of milder weather. 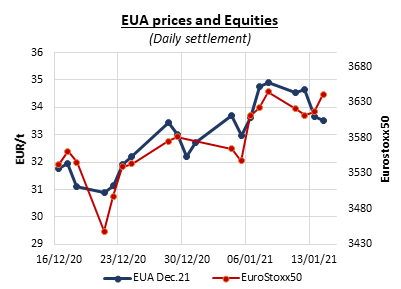 Prices weakened at the close, but the uptrend is ongoing

European gas prices weakened overall at the close on Friday. They started the session sharply higher, supported by the drop in Russian supply (to 263…

Contraction of industrial activity in China but rebound in services

The August PMIs confirmed the negative impact of the power cuts on China’s industrial activity in September, with the manufacturing PMI falling below 50 for the…