The European power spot prices continued to drop yesterday on expectations of stronger renewable production and weaker demand. Prices in Germany, France, Belgium and the Netherlands hence fell to 43.94€/MWh on average, nearly 10€/MWh below the clean gas costs.

Despite the higher temperatures, the French power consumption slightly rose on Tuesday to reach 73.56GW on average, +0.43GW from Monday. The nuclear generation however eroded 2.19GW to 48GW due to the power workers strike against the government plans to restructure EDF, but should climb back above 50GW today. The German wind production soared further to 33.1GW on average (+11.54GW dod) and should reach nearly 39GW by tomorrow, before starting to sharply ease back toward 15GW at the end of the week.

EUAs took once again direction from the gas market and presented a similar significant rebound yesterday, gaining nearly 4.7% from Monday amid a downward revision of temperatures for next week and risk of a cold weather return in February. An early upside move in the European equities and stronger U.S. financial markets provided additional support to the carbon market.

The bullish fuels and emissions complex lifted the power forward prices as well which posted hefty gains along the curve. 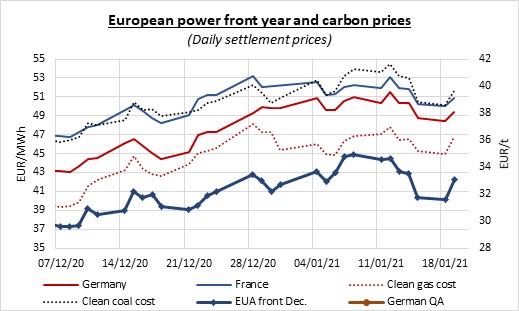 European gas prices were mixed yesterday, torn between the bearish impact of lower residential gas demand and weaker Asian prices and the bullish impact of…

ICE Brent prompt prices jumped to 69.5 $/b, as the API survey showed a total decline of 16 mb. Due to large stock draws in…