If forecasts of surging wind pressured the German power spot prices yesterday, day-ahead prices elsewhere in NWEurope posted hefty gains amid a significant rise of gas prices and scarcity in the U.K., despite the higher temperatures weighing on the demand. Prices rose by 10.32€/MWh in France to 73.85€/MWh while in the U.K. the prices climbed up to 198.79£/MWh, +85.86£/MWh dod.

The French power consumption eased on Tuesday as temperatures warmed and fell by 2.57GW to 77.55GW on average. The nuclear generation slightly waned as well to average 50.91GW, -0.80GW dod. The German wind production continued to rise to reach 30.14GW on average, +2.77GW from Monday, but should sharply decrease from tomorrow and fall around 5GW by Friday.

EUAs soared to a new all-time high of 35.42€/t on Tuesday morning, lifted by a stronger energy complex and spiking gas prices ahead of a new drop in temperatures and renewable power production forecast for the end of the week. Carbon prices however gave back part of the gains in the afternoon, likely on profit taking with additional pressure from the sliding equities, and eventually settled the volatile day at 34.66€/t, +0.13€/t from Monday. Failure to close above 35€/t for the third time over the past week may have highlighted the strength of the level’s resistance and the market participants’ doubts about the sustainability of the carbon sharp bullish trend with the auctions starting in two weeks and several countries strengthening or extending their lockdown measures to curb the worsening covid situation across Europe.

The sharp rise of gas and emissions prices buoyed the power forward market which posted gains along the curve yesterday, with the largest seen in the short-term contracts due to the soaring underlying gas prices. 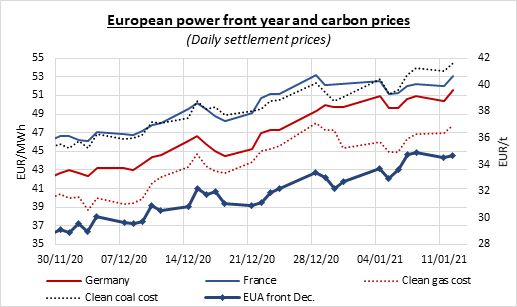 Most northwestern European power spot prices decreased yesterday on forecasts of weaker demand and higher wind output, although the French prices presented a much contained…

The European power spot prices climbed above 400€/MWh for today, lifted by a combination of below-average temperatures, a wind shortage, a weak nuclear availability and…

Most European prices down again yesterday

Prices were down again yesterday in most European gas markets (to the exception of Spain PVB prices). The drop seems to have been triggered by…
Join EnergyScan