The power spot prices climbed above 70€/MWh in Northwestern Europe yesterday, buoyed by the forecasts of below average temperatures and weak wind production. Prices reached 72.27€/MWh on average in France, Germany, Belgium and the Netherlands, +7.95€/MWh day-on-day.

The French power consumption strengthened by 3.71GW to 74.74GW on average on Tuesday, while the country’s nuclear production increased by 1GW to 48.01GW. The German wind generation dropped significantly to 10.86GW (-11.17GW dod).

EUAs retreated on Tuesday, dropping below 38€/t to 37.55€/t (-0.71€/t from Monday’s settlement) in the morning amid weaker oil prices, financial markets and energy complex, and forecasts of temperatures rising back above normal next week. The auction held in the morning clearing with a hefty 0.24€/t discount to the secondary market and a low 1.43 bid coverage may have provided additional pressure on the carbon market. After a slight recovery when it reached its 5-day moving average support, the EUA Dec. 21 contract eventually closed at 38.26€/t, -0.35€/t day-on-day and -3.8% from the intraday all-time high of 39.80€/t reached on Monday.

The power prices posted moderate losses along the curve yesterday, weighed by the retreating gas and emissions prices.

In other news, the French utility EDF oversold 2.5 GW of power to the French spot market between Saturday and Tuesday, which may have had an impact on spot prices and flows in the region. 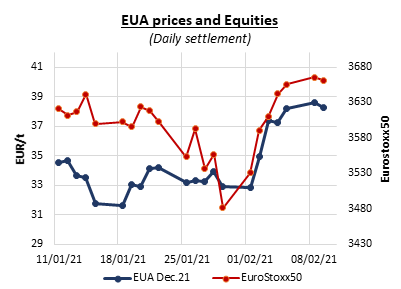 Crude markets continued to be partially bid up with ICE Brent November contract reaching 75.4 $/b. The industrial survey published by the API reported another sizable crude…

The release of the US CPI figures showed a further acceleration in the inflation rate in March 2022 at 8.5% yoy, which was the largest year-on-year…
Join EnergyScan