The NW European power spot prices remained overall stable yesterday at 61.61€/MWh on average (+0.86€/MWh dod), torn between forecasts of higher wind output and expectations of weaker demand. If prices in Germany, Belgium and the Netherlands edged up by less than 1€/MWh, prices in France posted slightly higher gains (+2.42GW day-on-day) as temperatures are forecast to drop today in the country.

The French power consumption was ignorantly up from Friday yesterday, reaching 72.83GW on average (+5.60GW) due to the below-average temperatures. Despite failing to climb above 50GW, the nuclear generation also improved at 49.43GW (+1.13GW from Friday). The German wind generation reached its lower point in the week at 6.02GW, but should strengthen to around 14GW today.

EUAs dropped significantly throughout Monday, heading toward 33€/t amid weaker gas prices, the imminent resumption of carbon allowances auctions, the falling European equities and forecasts of milder weather for early February. Several market participants attributed last week’s rally to technical move rather than a long-term buying interest and suggested that some profits taking are likely to occur this week considering the heavy supply coming to market in February. Dip-buyers and market players anticipating the long-term tightness expected in the market should however limit the downside potential. The Dec.21 contract eventually settled at 33.16€/t, -1.08€/t from the previous session.

The power short-term prices posted heavy losses yesterday, pressured by the fading underlying gas contracts and the upward revision of the temperatures forecasts for February. Further on the curve, the power prices also extended losses amid weaker gas and emissions prices. 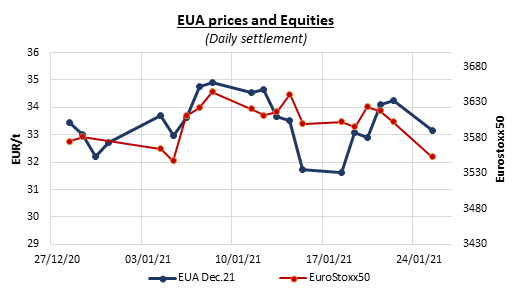 Crude oil prices posted significant losses on Wednesday as the IEA announced an additional 60 Mb release from strategic stocks of its members, on top of the…

US equity record their worst day in three months

Doubts about the US stimulus package and vaccine shortages are worsened by panic among short-sellers linked to the GameStop mania. The “fear index”, the VIX,…
Join EnergyScan